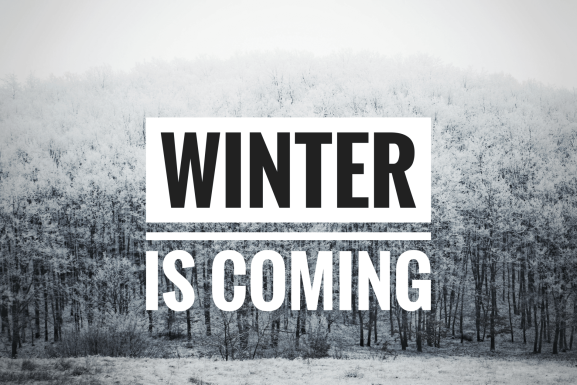 That time of year thou may'st in me behold,
When yellow leaves, or none, or few, do hang
Upon those boughs which shake against the cold,
Bare, ruined choirs where late the sweet birds sang.


--Willie the Shake, during the off season

I like Rahner's metaphor of "winter" as it relates to Christian faith.  It's an apt one.  But if you're going to establish the metaphor of the long season of death (or near death; winter always implies spring, and resurrection. Probably why Christmas comes in December, and Easter in April.), you have to stick with it.  Which is the problem with this recommendation:

It is a source of never-ending concern to Rahner that much of what people hear in the preaching and teaching of the church draws on a primitive idea of God unworthy of belief[**],rather than communicating the reality, the beauty, the wonder, and the strange generosity of the mystery of God.  The average sermon, along with the popular piety it encourages, has a basically retarded notion of God, he judged, acknowledging neither the absolute difference of God from the world nor the marvelous truth that God's own self has drawn near as the inmost dynamism and goal offered to the world.  All too often sermons work with the tired ideas of modern theism, reflecting a precritical mentality that sees God as someone whom we can calculate from our formula of how things work, thus replacing the incomprehensible God with an idol. They fashion the Holy in the image of our own concerns, our neurotic fears, our puny hearts, rather than honoring the impossible outpouring of love by which God not only sets up the world in its own integrity but, while remaining radically distinct, gives the divine self away to the world.  They neglect to inform us of the most tremendous truth, that we are called into loving immediacy with the mystery of God who self-communicates to us in unspeakable nearness.  After listening to such dismal sermons can we really say that the world "God" brightens up our lives?   Unfortunately Rahner wrote, it is more often the case that the words of the preacher fall powerlessly from the pulpit,  "like birds frozen to death and falling from a winter sky."


I don't disagree with this critique, but popular piety is an implacable stone that is not moved easily; and sermons are hardly the unstoppable force beating against it.  It isn't just the average sermon that has "a retarded [sic] notion of God," it's the average pew sitter.  Those who want a more challenged and challenging notion of God usually have their own ideas what that is, and will eventually feel slighted by the preacher enough to leave.  Those who like the popular piety will also be insulted, but they are more likely to have a rounded stone quality to them:  the rivers of tradition have washed over their beliefs so long, shaping them and even creating them, that the generic God of piety and 19th century sentimentality ("I Come To the Garden Alone") is a comfort to them.  Like rounded stones they lay flat and form the river bed.  The jagged stones of prickly particularity don't stick together, and don't even conform with other jagged stones.  Church is, at heart, a voluntary community; people don't volunteer to join a community that doesn't suit their interests, either in providing comfort, or in conforming to their preferences for particularity.

I agree with what I consider to be the more Jewish/Hebraic theology of God:  God was Other, God as Creator whose relationship to us is based in that fundamental act, as well as a relationship chosen by God and not created by us.  The "mystery of God who self-communicates to us in unspeakable nearness" "while remaining radically distinct," and "gives the divine self away to the world."  But honestly, what does that communicate to a mother grieving the death of her babe in arms?  What does that communicate to a broken soul seeking comfort and raised in the pieties of "Jesus loves me, this I know"?  God drawing near "as the inmost dynamism and goal offered to the world" may be a better theology than the misbegotten interpretations of John 3:16 that put atonement as the be all and end all of Christianity, but neither one offers much comfort in a funeral service, or to a couple considering divorce, or to abuse victims, or teenagers just trying to figure out how to be adults.  It isn't particularly meant to, but how do you replace centuries of Christianity, from sentimental pietism to the harsher cruelties of atonement and doctrines of original sin, without realizing you can't just wipe those things away, and the fact that preaching really isn't the most important work a pastor does?  Indeed, the emphasis on the sermon is the emphasis on "This is what we're here for."  It's a very Protestant emphasis, and it may actually be the problem of modern Christianity is the emphasis on the Word, rather than the praxis.

Two communities which tried to reimagine Christianity in modern times are Taize and Iona Community.  Whether they are still going strong, or have faded away, I have no idea.  Certainly neither "reformed" Christianity, nor did they mean to.  If anything, the accepted with metaphor of winter Rahner posits, and responded to it positively.  But I don't recall hearing any great preaching coming out of either community.  No one posted their sermons on-line (then again, neither group was ever associated with a U.S. presidential candidate).  I don't know of any real sense of preaching coming from either group.  Prayer and singing, yes; preaching?  Not so much.  I don't mean preaching was disdained; but the preaching of the Word, an emphasis of Protestant (especially Reformed tradition) churches, doesn't seem to have been central to either group.

In seminary we learned to "exegete" worship spaces.  There was an old German E&R (now UCC) church in the town where I first had a pulpit.  The original pulpit was in the back wall of the sanctuary, high above the pews.  It was a church with a balcony on three sides, not just at the back as a choir loft.  Built in the days before PA systems, it was also meant to put the preacher above the people, so all could hear.  But it emphasized the place of the Word in worship.  The sacrament of communion was probably practiced 4 times a year, not monthly as is the modern Protestant practice, nor weekly, as is the practice of Episcopalians/Anglicans and Lutherans (among the Protestants).  The Word was the center point of the service, the focal point of the worship space.  It is not at all unusual to find old Protestant churches where the pulpit is in the center of the chancel, or a chancel without an altar at all, merely a table to hold, occasionally, the communion elements.  The main thrust of the Reformed movement, to distinguish themselves from Catholic practice, was to center worship on the Word, rather than the eucharist.  Even the altar, meant to represent the place of sacrifice, was transformed to a table, meant to hold the food for the meal.

Maybe it's merely time to swing back to emphasis on the act of worship (liturgy, common prayers, singing), rather than on the observance of worship (listening to a sermon or, worse in my eyes, watching a performance presented as worship, and all you have to do is enjoy the band and the singers, and not be too disturbed by the "message").

I am a great fan of worship as an encounter with the living God, an encounter terrible and unworldly when it occurs.  I treated worship not as a battery recharge, filling up your spiritual tank with enough God to get you through the week before it was time to return to the filling station of the church; but as the time when you were most likely to encounter the reality of God, an encounter that would put the rest of your week (at least) in perspective.  If some pastors secretly affirmed "vulture theology," the idea that sooner or later (for weddings, funerals, crises), you had to "come back to church," then mine was akin to "eat a live toad first thing every morning, and nothing worse will happen to you all day."  I didn't mean my doxology (philosophy of worship, loosely stated) to be quite so cynical, but I did mean to turn the emphasis around from what God can do for us, to what we can do having experienced God.  Had I been a better pastor overall, it might have actually led somewhere.

So if I disagree with Rahner (well, as presented by Elizabeth Johnson), in the end, it is a disagreement with the assumption that Protestantism as we have known it will always be with us, and will always be essential to Christianity.  Even the Southern Baptists, the most reformed of the Reformed tradition (with the exception, perhaps, of a few small and virulently Calvinist denominations), are trying to rediscover Advent and even Lent to give their worship year a bit more of a structure than just Christmas Even and Easter Sunday.  Southern Baptists will never become liturgical, and I encountered enough resistance to my "Catholic" style of worship to last me a lifetime, or to make me think all Protestants will ever agree on anything.  I agree with Rahner that winter is coming; but I'm also convinced no shift in preaching is enough to assuage the pain of the losses winter brings.  Then again, winter always leads to spring, and even winter is a time for joyous holidays.
Posted by Rmj at 1:05 PM