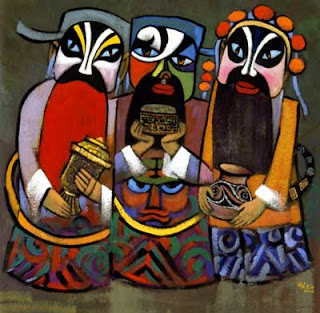 60:2 For darkness shall cover the earth, and thick darkness the peoples; but the LORD will arise upon you, and his glory will appear over you.

60:3 Nations shall come to your light, and kings to the brightness of your dawn.

60:4 Lift up your eyes and look around; they all gather together, they come to you; your sons shall come from far away, and your daughters shall be carried on their nurses' arms.

60:5 Then you shall see and be radiant; your heart shall thrill and rejoice, because the abundance of the sea shall be brought to you, the wealth of the nations shall come to you.

60:6 A multitude of camels shall cover you, the young camels of Midian and Ephah; all those from Sheba shall come. They shall bring gold and frankincense, and shall proclaim the praise of the LORD.

72:11 May all kings fall down before him, all nations give him service.

72:12 For he delivers the needy when they call, the poor and those who have no helper.

72:13 He has pity on the weak and the needy, and saves the lives of the needy.

72:14 From oppression and violence he redeems their life; and precious is their blood in his sight.

Ephesians 3:1-12
3:1 This is the reason that I Paul am a prisoner for Christ Jesus for the sake of you Gentiles--

3:2 for surely you have already heard of the commission of God's grace that was given me for you,

3:3 and how the mystery was made known to me by revelation, as I wrote above in a few words,

3:4 a reading of which will enable you to perceive my understanding of the mystery of Christ.

3:5 In former generations this mystery was not made known to humankind, as it has now been revealed to his holy apostles and prophets by the Spirit:

3:6 that is, the Gentiles have become fellow heirs, members of the same body, and sharers in the promise in Christ Jesus through the gospel.

3:7 Of this gospel I have become a servant according to the gift of God's grace that was given me by the working of his power.

3:8 Although I am the very least of all the saints, this grace was given to me to bring to the Gentiles the news of the boundless riches of Christ,

3:9 and to make everyone see what is the plan of the mystery hidden for ages in God who created all things;

3:10 so that through the church the wisdom of God in its rich variety might now be made known to the rulers and authorities in the heavenly places.

3:11 This was in accordance with the eternal purpose that he has carried out in Christ Jesus our Lord,

3:12 in whom we have access to God in boldness and confidence through faith in him.

Matthew 2:1-12
2:1 In the time of King Herod, after Jesus was born in Bethlehem of Judea, wise men from the East came to Jerusalem,

2:2 asking, "Where is the child who has been born king of the Jews? For we observed his star at its rising, and have come to pay him homage."

2:3 When King Herod heard this, he was frightened, and all Jerusalem with him;

2:4 and calling together all the chief priests and scribes of the people, he inquired of them where the Messiah was to be born.

2:5 They told him, "In Bethlehem of Judea; for so it has been written by the prophet:

2:6 'And you, Bethlehem, in the land of Judah, are by no means least among the rulers of Judah; for from you shall come a ruler who is to shepherd my people Israel.'"

2:7 Then Herod secretly called for the wise men and learned from them the exact time when the star had appeared.

2:8 Then he sent them to Bethlehem, saying, "Go and search diligently for the child; and when you have found him, bring me word so that I may also go and pay him homage."

2:9 When they had heard the king, they set out; and there, ahead of them, went the star that they had seen at its rising, until it stopped over the place where the child was.

2:10 When they saw that the star had stopped, they were overwhelmed with joy.

2:11 On entering the house, they saw the child with Mary his mother; and they knelt down and paid him homage. Then, opening their treasure chests, they offered him gifts of gold, frankincense, and myrrh.

2:12 And having been warned in a dream not to return to Herod, they left for their own country by another road.

And having been warned in a dream not to return to Herod, they left for their own country by another road.

The church is supposed to be all about the status quo, and God is supposed to uphold the stability of the world as we know it. That's why we say God is on "our side," that "Gott Mitt Uns" is imprinted on our assurance that whatever we do, as people, as communities, as nations, as churches, as like-minded individuals, is approved of by God. Because if it isn't, then we are not the wise men, we are Herod. And we've heard the story; nobody wants to be Herod. 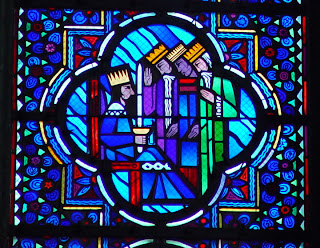 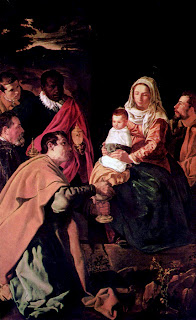 And yet already he's causing trouble; already he's upsetting the status quo. Already he's causing magi to take long journeys to find him, and when they do, they kneel before him, him and his peasant mother; and kings in Jerusalem turn uneasily in their beds, and clutch their swords tighter, seeking comfort in what they can control.

"We have met the enemy, and he is us!" The wisest words Walt Kelly ever penned; and they go to the heart of the Christian mystery, or Christian doctrine. The revelation of the Lord incarnate prompts worship, awe, and fear, because in the child we recognize ourselves, and we recognize the Creator, and we recognize our enemy. Our enemy, of course, is supposed to be the stranger, the foreigner, the one not from our tribe, our town, our land. Matthew opens his gospel with a sign that all people are God's concern, and anyone can know the revelation of God. So even our art should reflect the metaphor of this story, that the light has come for all nations. Tradition tells us at least one of them was African, but who can say? And who can know from how far away they came?

Today begins the season of Epiphany: celebraed by some; ignored by others. The "original Christmas," some say. Maybe; maybe not. It is a season separate from Christmas, but related to it; and in France and Cajun Louisiana, it is celebrated itself with King's Cakes and Gateau du Roi and parties and celebrations, right up to Fat Tuesday, Mardi Gras, when the shriven season takes over and Lent begins. It's the English who called it Shrove Tuesday, and taught that name even to my all but non-liturgical Presbyterian church of childhood, the day to "shreve" the cupboard of fats and oils in preparation for the fastings of Lent. The French Roman Catholics had the better idea: to celebrate the 5 or 6 Sundays of Epiphany, and carry it out right up to the last possible minute, the first stroke of midnight on Ash Wednesday morning. Jesus, tradition says, was born at midnight on Christmas Day. We don't know, so why not sanctify the whole day? So, also, Ash Wednesday begins at midnight, but until then: celebration!

Christmas, of course, is supposed to be about happiness; but it is too often presented as sold and commodified and purchased happiness, and if our reality doesn't meet out expectations, then we have fallen short of the status quo, and it is worse than if we were indifferent to the whole idea of happiness at all. Happiness itself, however, is not about the status quo. That's why it fails so often, if it does, at Christmas: because we have made happiness the status quo of that season of the year, and it is not the status quo that brings happiness, but the disruption of it. How often to we think we must be surprised by joy? That a surprise party is so much richer and more meaningful than a well-planned birthday fete? How often do we prefer the surprise of a present to the mere recieving of money or a shopping trip? The surprise is not the status quo, or it isn't a surprise. It's the disruption of the status quo that pleases, not the perfection of it. Our status quo today is about the not yet, not the now, about what you haven't yet purchased, done, accomplished, gained, gambled, dreamed of; not of what you are enjoying in the moment. I can't sell you what you have in the moment, I need you to buy from me what you don't-have-yet. That isn't happiness, it is emptiness; it is want; it is the craving you can never fulfill. And that, in modernity, is the status quo.

Happiness disrupts the status quo. Happiness is celebration of now, of the accumulation of the harvest which will rot and decay if it isn't enjoyed and then replenished in the spring. Happiness is the celebration of life today, not life as it will be during the Super Bowl, or upon the purchase of the new car, the new electronic gadget, the next pop song download, the next DVD from NetFlix. Happiness disrupts the status quo and brings a welcome change that is a meaningful change. Happiness is the unexpected suddenly recognized.

The season of Epiphany is about that happiness, that creative irruption into the status quo of the Creator of the Universe; and now you see Him, and now you don't. The season of Epiphany is about the disruption that brings so much joy and interest travelers cross oceans of land just to see if it is true, just to see the one they hadn't expected, but are delighted to admire. The season of Epiphany is not about the disruption which upsets Herod; that is given to Christmas, to the reality of the Incarnation. The season of Epiphany is about the recognition, the apocalypse, the revelation. It is the break with the ordinary and the regular that puts everything out of control because it brings such joy. Chaos can be creative as well as destructive; but when it is destructive, it is because the enemy is us; because we fear what we might do. We have met the enemy, and he is us; and the one we see at the Epiphany will tell us, just as wisely, to love our enemy. It is an invitation to chaos, but it is an invitation to the chaos of happiness, of joy, to the chaos of creativity when the enemy we see looks back at us from the mirror, and smiles, and joins in the dance. The chaos of happiness never lasts long enough; if it did, it would be the status quo, and we would need a new disruption from it. But it can go on for a few weeks, at least.

Take joy. Happiness, after all, reveals that underneath the status quo, lies the chaos of creation, the chaos of joy. And this, too, shall be a sign unto you. 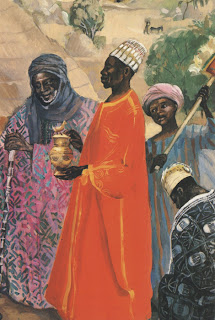