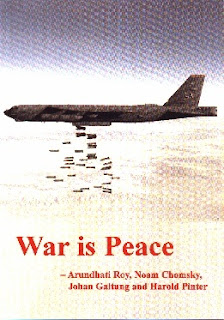 I posted this comment at Eschaton in response to this thread, but I thought I'd bring it over here and expand on it a bit. What's a blog for, after all?

The topic of the thread was Giuliani and 9/11 (two things which often appear together), but just below was a thread about Iran, and a link to this piece by Glenn Greenwald. Now, the MSM is a favorite Greenwaldian target, but it's a whipping boy more often than not, a messenger who tells us what we want to hear more often than a devious conspirator with the Powers that Be to keep us all subjugated and ignorant. If the conspiracy theory were true, after all, the existence of people like Greenwald, or much of left blogistan, or Pacifica Radio and Democracy Now!, would only mean we prefer our ignorance, or we just aren't paying attention, or something. The fact is, the ignorance about the consequences of war Greenwald rightly complains about, is as American as, well, violence and cherry pie. If we don't listen to Greenwald, et al., it's because we can't, as a culture, abandon the preferred narratives about the "value" of warfare.

Just read Twain's "War Prayer," and you realize this business of American's being oblivious to casualties in Iraq is not new, nor was it created by Bush's "hiding" the caskets at Dover AFB, nor by the complicity (entirely, anyway) of the MSM. Or just remember Vietnam. We got daily body counts on Vietnam. It was in the morning newspaper. It headlined the evening news, back when EVERYBODY watched the Big Three for their news. Nobody so much as threw up at the thought of so many bodies as were reported (nor questioned the accuracy of such reports).

I guess it's good Giuliani can't win on 9/11, and the bodies of those poor souls. But honestly, this refusal to face the consequences of our government's actions in foreign lands is not new. Even soldiers come home from Iraq (as they did from Vietnam) without ever criticizing the narrative that war, whenever it is conducted, is good.

Or consider what Bush said at Auschwitz, as reported by watertiger:

President Bush had tears in his eyes during an hour-long tour of Israel's Holocaust memorial Friday and told Secretary of State Condoleezza Rice that the U.S. should have bombed Auschwitz to halt the killing, the memorial's chairman said.

This provoked a rather lively discussion over there about whether or not the weapons of war are useful tools to combat evil. Is more violence always the answer to violence? That was one of the many arguments used to go into Iraq, and it's still used to justify the invasion now, as Juan Cole points out in remarks Greenwald quotes. Is there a calculus to war that can be applied in this case, a metric that measures death and misery and says it all came out right, or all came out wrong?

We apply that argument to World War II ("What if the Nazis had won?") and Auschwitz is the crown jewel of that argument; but World War II is the exception that proves the rule: war is hell, and a bloody fiasco, and very little more. Does anybody want to seriously argue we uncovered so much as an Auschwitz" in Iraq? And yet still, no one thinks war is such a bad thing. Maybe misapplied in the case of Iraq, but....

Because, after all, war is peace:

U.S. President George W. Bush said on Friday the United States would have a long-term presence in Iraq that could "easily" last a decade, but that it would be at the invitation of the Iraqi government.

In an interview with NBC News, Bush was asked about recent comments by Republican presidential hopeful Sen. John McCain that it would be fine with him to have a U.S. military presence in Iraq for 100 years.

"That's a long time," Bush replied, adding that there "could very well be" a long-term U.S. presence in Iraq at the invitation of the government in Baghdad. When asked if it could be 10 years, Bush replied: "It could easily be that, absolutely."

UPDATE: For those interested, this article seems to summarize at least the non-professional's state of the argument over the non-attacks on the German concentration camps. I think the issue boils down to one of hindsight: knowing what we know now, should the rail lines at least have been bombed? But we are caught looking with the knowledge that the Nazi war machine was broken and vanquished by the Allies. That is not knowledge the Allies had in 1944, and the question during war is: where do you put your resources, and why? Nanking can't be equated to Auschwitz, but war crimes were committed there, too. The estimates of civilians killed seems to range between 200,000 and 300,000, and with an estimated 20,000 women raped, the "Rape of Nanking" can apparently be taken quite literally. Which is not to play a numbers game, but to illustrate that perhaps Nanking is "the forgotten Holocaust." Auden told us, later that, "maps can point to places where live is evil now./Nanking. Dachau." We remember the latter; we've forgotten the former. Which means something else again about our tolerance for evil, and what we consider evil.

Which is the problem, isn't it?