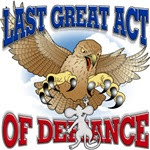 So it's cold enough today to wear a sweatshirt, and I'm wearing the one that says, in Latin (supposedly): "If you can read this, you have too much education." and no, I don't have that much education, so I can only guess at the translation, or even guess that it actually is Latin.

"Supposedly" because because the Latin seems a little too Germanic/English to me to be truly Latin. But it made me remember the infamous phrase "Illigetimi non carborundum," which, it turns out, is mock Latin. But it's also a phrase that apparently originated in World War II, created by a Brit (no surprise, considering the heavy hand of Rome that still rests on British culture lo these 20 centuries later). But before I knew that, too, was suspect Latin, I was climbing the stairs thinking about Latinate phrases and the Internet and wondering: "Whatever happened to that sense of optimism, however small it was, which promoted such a defiant, such as it was, phrase?" Or even the optimism of that picture?

I thought the intertubes were supposed to bring about the new millenia by connecting all of us disparate and disjointed souls in one new Age of Aquarius. Instead, we sit around bemoaning the sorrier and sorrier state of the world, and passing harsher and harsher judgments on strangers (do any of us really know the people we complain about?).

You know, this "Mission: Impossible" meme is starting to become a theme, a basso continuo, if you will. Wotta way to start a year, huh?