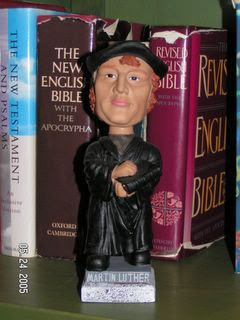 Actually, considering at least two of these items are blatantly "American" (I recognize the soap, and the PJ's could only be the product of an earnest American housewife), it's funny I know of no comparable column to this in major American papers, or any American counterpart to Ruth Gledhill. I think this is because the Constitution really is the formative document not only of our nation but of our public culture, and that "separation of church and state" thing, at least since the 14th Amendment, has become so strong that we can't imagine a major news outlet regularly reporting on religion.

Well, that and the constant and peculiar emphasis on religion as a "private" matter, to the point we drop the "Reverend" from Dr. Martin Luther King's titles, ignore the place of the African-American church in the Civil Rights movement, overlook the number of prominent American Catholics (Dorothy Day; Thomas Merton; the Berrigan Brothers) in the anti-war and social justice movements (we especially prefer to ignore liberation theology in the Americas). Religion is apparently so private we can't even talk about it in public, except to admire the success of a Joel Osteen or mock the visions of an Oral Roberts.

It's just a strange thing living in "the most religious country on earth," as this place is often called. We can't talk about religion publicly; we can't recognize religion as a major force in human existence; if we study the Bible, it must only be as literature, and yet to do that is insulting to believers (somehow). (On the other hand, how do you understand "Call me Ishmael," if you don't know who Ishmael is? We have plenty of people reacting to caricatures of Christianity, today. How do we educate our children so they are not so ignorant about religion, a topic surely as important to understanding their place in the world as physics, calculus, and biology are?) Why is it we have no regular coverage of religion in America, no constant series of reports on what the Catholic church or the Anglican Communion of the Southern Baptist Convention is up to? Is it because we don't have a state church? Or is it because any reporting on religion is a prior non-inclusive? Or is it just that we have to insist religion is a private matter, lest the wall of separation come tumbling down?

Sorry, religious metaphor; I'll have to work on that.....