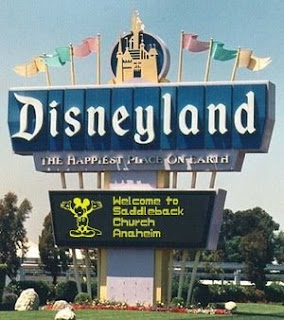 In this case, the campaign is objecting to a statement by NBC's Andrea Mitchell on "Meet the Press" questioning whether McCain might have gotten a heads-up on some of the questions that were asked of Sen. Barack Obama (D-Ill.), who was the first candidate to be interviewed Saturday night by Pastor Rick Warren at a presidential forum on faith.

Seems Pastor Warren didn't have as much control over his participants as he thought he did:

Senator John McCain was not in a “cone of silence” on Saturday night while his rival, Senator Barack Obama, was being interviewed at the Saddleback Church in California.

Members of the McCain campaign staff, who flew here Sunday from California, said Mr. McCain was in his motorcade on the way to the church as Mr. Obama was being interviewed by the Rev. Rick Warren, the author of the best-selling book “The Purpose Driven Life."

And it's double-plus uncivil, because John McCain is a former POW (did you know that?):

“The insinuation from the Obama campaign that John McCain, a former prisoner of war, cheated is outrageous,” Ms. Wallace said.

Of course, we could speculate on the "gate" Warren took in for this lesson in civility. According to the NYT article, 2000+ people were in attendance Saturday night. At $500 to $2000 a ticket, that's certainly what some people would call "rich," either for the person collecting, or to describe the persons paying. But never fear, nobody on stage that night would say that:

The two differed most, perhaps, in their answers to the question on wealth and tax: "define rich." Obama first softened it with a dig at his host, who not only leads a mega-church but is a mega-million-selling author of self-help books. "If you've got book sales of 25m, then you qualify," Obama told Warren, adding: "If you are making $150,000 or less as a family then you are middle class, or you're poor. If you're making more than $250,000, you're doing well."

McCain's position was more nuanced. "Some of the richest people I've known in my life are the most unhappy," he said. His wife applauded from the audience. "I don't want to take any money from the rich, I want everybody to get rich," said the man who has professed that economics is not his strongest suit. "If you're just talking about income, how about $5m? It doesn't matter because I don't want to raise anyone's taxes."

Warren nodded his understanding. Pastor Rick, whose church is considered to be at the vanguard of compassionate Christianity - different to the old model peddled by some social conservatives over the last decade - understands many things, money among them.

Yes, yes he does. Money talks, and Pastor Warren and his audience listen. Which is a situation with interesting parallels to the parable in Luke, about Lazarus and the rich man; but let's not go there too hastily, because we all know: money talks:

"He's a fabulous marketing man," said Richard Schweinberg. A local government officer who attended the forum, Schweinberg was one of the early adopters of Warren's message, joining the church the year Pastor Rick started it, in 1980.

"There were 70 people in a school auditorium," he remembered. "It was just Pastor Rick and his wife. She played the piano and he was the preacher. Now there are three main preachers: in my household we call them the teacher, the comic and the marketeer. Pastor Rick is the marketing pastor. He knows how to sell himself and the church and religion. I don't know if he knows that that's what he's doing."

Once again, I've been down this road once or twice before. And if you doubt that church marketing is a business all its own, I found this and this when I asked Google to find those old posts of mine. At Google, both emphasize their "church marketing" skills. Which means it's all about $$$$, because somebody's got to pay the bills that keep those marketers in business and provide them with such slick websites.

But I do wonder if the British clearly have a different understanding of "nuance," since McCain's answer wasn't so much subtle as ducking for cover. One is left wondering how many questions he didn't see coming. And I'm quite sure Pastor Warren knows exactly what he's doing. It's not his awareness, but what he's doing, that bothers me.

Of course, on the question of wealth, you never disappoint Americans by talking about how good it is, and for all his social consciousness, I don't hear anything coming from Rick Warren that sounds even vaguely like Dorothy Day or Gustavo Gutierrez. His compassionate Christianity seems to be pretty much limited to asking Dives to throw Lazarus a few slightly better scraps from the table. I should say I like Obama's answer much better, but I note the audience reaction doesn't say anything about Obama's response. Of course, if you can afford the price of admission, you're going to like McCain's answer a lot better.

Wasn't there another parable about a rich man and a camel and the eye of a needle?

Anyway, I've yet to hear of any questions about the candidates positions on charity or compassion; but apparently they were asked about evil:

“We are not, as individuals, going to be able to erase evil from the world,” [Obama] said. “That is God’s task. But we can be soldiers in that process and we can confront it.”

Mr. McCain dispensed with nuance: “Evil must be defeated,” he said, identifying Islamic extremism as one example.

“I have no doubt,” he said, leaning forward like a fighter. “None.”

Of course, I can understand why Warren would simply nod at that, rather than wonder about the speaker's sanity:

There is a difference between that and living under oppression, living with fear for your life. That's why whether or not they found weapons of mass destruction in Iraq is beside the point. Saddam and his sons were raping the country, literally. And we morally had to do something. If you have a Judeo-Christian heritage, you have to believe it when God says that evil cannot be compromised with. It has to be resisted, it has to be overcome.

That's the kind of language that makes people wary about mixing religion in politics. Which is back to why this whole forum bothered me, in the first place: not because of the theology of Rick Warren, or the politics of John McCain or even Barack Obama; but because when you add to politics the absolutist stance sometimes encouraged by the religious (if we have to add a religious perspective, I'd prefer adding the humility and simplicity of the Desert Fathers), we end up with the Global War on Terror and a battle to defeat "evil."

Barack Obama, to his credit, focused on the parable of the sheep and the goats, from Matthew; and averred that it was God's job to eradicate evil, if it could be done, not ours. One might even point to a story by Nathaniel Hawthorne, an American author who understood the nature of evil far better than John McCain or Rick Warren do. In his story "The Birthmark," a scientist obsesses over removing a blemish, a birthmark, from his wife's cheek. Sadly, when he finally succeeds, the cure kills her. It seems that stain of imperfection was a necessary part of her, as it were; and removing it removes her, as well. An object lesson from the author of The Scarlet Letter in the necessity of imperfection, and the evil that emanates from trying to force our vision of the good on the world. Certainly American efforts to eradicate evil, in our country if not in the world, have lead to still more evil being done than what we started with.

Funny neither Sen. McCain nor Pastor Warren were familiar with the concept. It's as Christian as the Beatitudes or the Sermon on the Mount; or even the Lord's Prayer. Or another of those parables, about the splinter in your brother's eye, and the log in yours.

Inconvenient things, parables; must be why they don't come up more often.