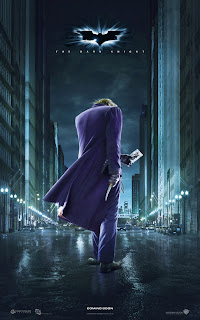 Interesting moral question raised by this movie, one I'm just starting to think about (and if you haven't seen it yet, and plan to, well, there are spoilers ahead. You have been warned.). It has to do with why, in the movie, Batman is now referred to as the "Dark Knight." And the question is this: are you morally culpable if society (or a community) thinks you are, even if you have not committed the culpable acts? To use an analogy, consider the criminal law.

We all know police turn away people who confess to a crime they didn't commit, and this is right: the innocent, especially the deluded, should not be punished for what they did not do. But at the end of the movie, this is exactly what Batman does: he takes responsibility for what he did not do, all to preserve the notion of a "shining knight," that knight being the District Attorney Harvey Dent, driven to homicidal rage and the need for vengeance after horrific injuries and losses (losses that don't affect Batman in the same way, which is not insignificant). Taking on the sins of others (shades of a Christ figure!), Batman becomes an outlaw in the old English sense of the word: one literally outside of the law, beyond its protections, exposed to calumny from all sides. And it is a role he takes on, not one he deserves.

So, is he morally culpable? One is tempted to say "No." But that is only because we have knowledge the community in the film does not. We know what Commissioner Gordon knows, what Batman knows. But morality, ethics, is a matter for the community, not the individual. The individual cannot declare himself above, or even absolved, by the community for what the community considers an immoral act. Even the Romantic hero who defies the gods (or the community, by violating its ethics for a 'higher purpose') has to take the punishment of the community for such hubris (whether it is truly hubris in the Aristotelian sense, or not). A community is the necessary element for an ethic, a morality (even though the two terms have different referents). Isolated on a desert island, one cannot commit an unethical act, because there is no custom of the community to violate. Perhaps one can commit an immoral act, if one believes in transcendent rules governing behavior, rules one adheres to as a representative of a group which is no longer with you, but whose strictures you still observe; or if one believes in a metaphysical being, a deity who offers or establishes the guidelines of a moral system.

Batman, of course, does not operate on a desert island. In the film he is guilty, but yet not absolutely guilty. He accepts responsibility for crimes he did not commit, and there is no evidence allowed to exonerate him. Isn't he, then, guilty? Yes. No. It's almost a Schrödinger’s cat state of culpability: we know he is not guilty, but we can't know it for sure until we open the box (release the evidence of the true murderer), and that Batman himself will not let us do. So he is guilty, even though he isn't.

And lest you think this theme of death and responsibility a minor one in the film, consider the situation of the prisoner's dilemma created when two ferries are loaded with people, one innocent civilians, the other other the worst convicts, and both set adrift in the river of the city by the Joker, who gives each boat a choice: push the detonator provided and destroy the other boat, or both boats will be destroyed at midnight. In the end, it is the largest, scariest, deepest voiced black convict who walks over to the guard who is refusing to take responsibility for saving his life by killing others, and says: "Give it to me, and I'll do what you should have done 10 minutes ago." He takes the detonator in his manacled hands, and tosses it overboard. A few tense minutes later, the civilians on the other boat also refuse to commit murder in order to save themselves. The weight of the community on them, the leaders in both boats refuse to act: instead, the people do, and the wisdom of Jeffersonian democracy is upheld. (Of course, it helps that Batman then stops the Joker from blowing up both boats, but that's to ensure their moral choice was not made in a wholly cruel and indifferent universe. This isn't a foreign film, after all!) The weight of the community on his shoulders, Batman acts, too. But is it a moral act? Is he justified in proposing what is essentially a lie: that the symbol of justice, Harvey Dent, who reached his personal breaking point and became a murderer in the name of vengeance, is actually an innocent wounded by evil (the Joker) and so dead as a martyr to justice?

Of course, Batman kills two birds with one stone by his decision. Imitators of his activities put themselves, as well as Batman, at risk by their mimicry, even as Batman's heroism inspires the evil of the Joker (it's a wonderfully tangled set of moral questions and problems posed in this film). Having become 'outlaw' by his own hand, he alone can open the box and determine whether or not the moral dilemma (the "cat") is true or false (i.e., dead or not dead). But by keeping a hand firmly on that box, and by being branded a murderer, he regains his power to intimidate (one he loses to the Joker's propensity for killing anyone at anytime, when the criminals of the city know Batman will never cross that line). He also becomes a figure, not to emulate, but to excoriate. So he is the defender of Gotham, the crime-fighter par excellence; and yet he is no shining knight. As Commissioner Gordon dubs him in the last lines of the movie, he is a "dark knight."

The concept of responsibility is one of those strange concepts that give food for thought without giving themselves over to thematization.....This paradoxical concept also has the structure of a type of secret--what is called, in the code of certain religious pratices, mystery....The exercise of responsibility seems to leave no choice but this one, however uncomfortable it may be, of paradox, heresy, and secrecy. More serious still, it must always run the risk of conversion and apostasy; there is no responsibility without a dissident and inventive rupture with respect to tradition, authority, orthodoxy, rule, or doctrine.

Batman is left with paradox (the "dark knight"), heresy (he is self-branded a murderer, in the course of upholding the laws which forbid murder), and secrecy (the secret he now keeps is the most important secret of all). And now he runs the risk of conversion (Is he not already a criminal in fact? will more copycats seek to follow this new imago? ) and apostasy (can he remain a crime-fighter? Will Gordon maintain his secret? Must he be even more alone now than before?). As Derrida says: "there is no responsibility without a dissident and inventive rupture with respect to tradition, authority, orthodoxy, rule, or doctrine." And that rupture is precisely a moral one, as Derrida and Kierkegaard pointed out in the context of the story of Abraham and Isaac.

This movie is not that story; but morally, it only not quite that story. Is Abraham morally culpable for planning, even attempting, to slay his son? The answer is yes; and no. Again, in the realm of what Johannes de Silentio calls the "ethical" (and there are reasons he doesn't call it the "moral"), the realm Isaac and Sarah and the world live in, Abraham is a murderer, especially in the famous formulation of the Gospels ("Those who leer at a woman and desire her have already committed adultery with her in their hearts."). But before God, in the "religious" sphere, or the realm of the eternal, Abraham is not only justified, but righteous. But he is always guilty in the ethical. There may be a teleological suspension of the ethical, but as Johannes de Silentio asks: "Everything depends upon how this man stands related to the utterance of the augurs which is in one way or another decisive for his life. Is this utterance publici juris, or is it privatissimum?" The entire resolution of the problem hangs on that question, and it is a resolution that is irresoluble:

de Silentio is imagining the quandary of the Romantic hero, the individual struggling against both Fate and the community, and determined to remain true to himself above all. Caught in that struggle, de Silentio imagines a true Romantic victory, one that can never be shared, that can only be known individually, that can only be known to a community outside the community with which the individual struggles, if only so someone can then appreciate the exquisite anguish of this tragic hero, and so the situation is truly tragedy (which is, after all, a play) and not horror and despair. As de Silentio puts it at the beginning of his meditation:

If there were no eternal consciousness in a man, if at the foundation of all there lay only a wildly seething power which writhing with obscure passions produced everything that is great and everything that is insignificant, if a bottomless void never satiated lay hidden beneath all--what then would life be but despair?

That's precisely the moral battle of the movie: is there such an eternal consciousness (the "good" to which Batman wants to remain faithful), or is the foundation of all only a wildly seething power writhing with obscure passions (the Joker, an agent of chaos, a man with no identity, whose life story itself is a fiction he makes up for his own entertainment when torturing his next victim)? But is that "eternal consciousness" necessarily "God"? There's no hint of that in the movie (unlike in, say, Harry Potter), nor need there be. But if there is nothing transcendent, no symbol larger than the individual herself, then the Joker wins. That's the moral center of the story: the question of sacrifice, and to what the sacrifice is offered, and why. Batman becomes outlaw in order to save the city. He becomes guilty in order to bring hope. He becomes immoral, in the name of morality. And he is guilty; while at the same time, he is not. And he is a symbol for the people, at the same time they find they don't need symbols, in order to behave morally.