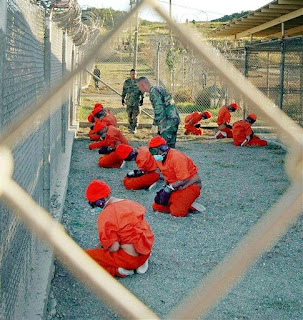 The "worst of the worst," we were told, were being held in Gitmo. The first of those "worst" to be tried was not even convicted of carrying missiles around with him when he was captured. Instead, he was convicted of, basically, being Osama bin Laden's driver. And he was sentenced, effectively, to six more months in prison. But the most significant part was the statement of the judge at the sentencing hearing:

The judge — quite remarkably — said, 'I hope Mr. Hamdan you're soon able to join your family in Yemen.' And Mr. Hamdan said, 'inshallah' ['God willing'] and the judge answered him 'inshallah.' It was an amazingly emotional scene."

Mr. Hamdan is not a "terrorist" or a "murderer" or a "criminal." He is a human being, convicted of a crime for which he will serve a sentence established by law and a judicial proceeding. And the judge is not an avenging angel or even a "decider." He is a court official carrying out his appointed role; and he, too, is a human being. This, the world should take note, is how human beings treat each other, and seek to effect justice.

It was a dubious judicial proceeding, to be sure, but the outcome, as the BBC noted, "was far more lenient than anyone expected. Even civil and human rights observers said they were positively shocked." And what moved me is what moved John McChesney: Mr. Hamdan apologized for his crimes, and the judge wished him well and hoped he would rejoin his family some day, God willing.

But the judge pronounced as a Muslim blessing, in response to Mr. Hamdan. It was that small incident, after all the rest of this trial, that gave me hope once again in the people of this country, and their sense of justice and fairness. The BBC isn't sure the Bush Administration will bow to pressure to release Mr. Hamdan, but NPR is not so sure. Six months from now someone else will be President, and I have no doubt Barack Obama would release someone like Mr. Hamdan at that point. Certainly there will be more than a few people in positions of power and influence in the US government who will consider that the right outcome.