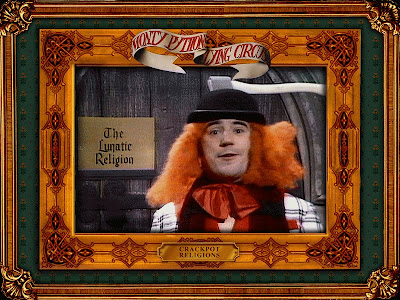 There is an enormous amount of nonsense coming out of the end of Lambeth (start here, then you can go here, and, well, this one's not bad, then there's this one, and this one, and here, and finally this one. Just the order in which I found them; no more significance to it than that.). The better stuff is here and here. And actually what set me off was this one:

"If North American churches do not accept the need for a moratoria [on same sex blessings and the consecration of gay clergy] we are no further forward. We continue to be in grave peril," he said.

For Dr Williams's strategy to work, conservative primates from Africa must also pledge a moratorium on consecrating cross-boundary bishops to minister to evangelical congregations in liberal dioceses.

Bishop Trevor Mwamba of Botswana, a favourite for the vacant post of Primate of Central Africa, said: "The conference has been excellent, I would even say it has been divinely inspired. There was a growing sense of oneness, a sense that we all have a lot in common. We have been transformed by the relationships we have formed."

However, early indications from other provinces in Africa and Asia are that the illicit consecrations will continue.

In addition, Bishop Gregory Venables, the Primate of the Southern Cone, who has taken an entire US diocese into his province, is expected to continue poaching conservative parishes and dioceses from the US.

Seems to me there's grave peril all around, and the worst of it is those who insist on imposing their power on others, and even using that insistence as an excuse to accrue still more power to themselves.

But then, I've made that observation before.

Opposing them are the people I'm sympathetic with:

Liberals in the US are determined to fight the moratorium on gay consecrations and same-sex blessings agreed by the Episcopal Church's convention two years ago. The Reverend Susan Russell, of the gay lobby group Integrity, said: "It is not going to change anything on the ground in California.

"We bless same-sex relationships and will continue to do so."

Although I'm sympathetic with this, too:

A statement signed by more than a quarter of the world's Anglican archbishops said theological voices outside the west had been missing from some key sessions. "We are concerned with the continuing patronising attitude of the west towards the rest of the churches," they said.

But I'd be a lot more sympathetic if those who are so concerned with "patronising attitudes" would show equal concern for those also in their church poaching for congregations. Perhaps they are, and that concern is not being reported. Charity in all things, I suppose.

But where is the charity in this situation? In a world suffering from exploitation in Nigeria, or hatred of persons for who they are and who they were born to be, and war and famine and starvation brought on by an ever growing need to simply consume energy (when in human history did we ever obsess so about consumption of something so utterly ephemeral?; and in what way does this obsession betray "progress" or "human evolution" [which always equals "improvement," even when it so blatantly isn't?]). In a world, in other words, so clearly in need of spiritual guidance: why is any Christian church fighting with itself over who is to be allowed to stand before, or behind, and serve at, Christ's table? Is this all the Christianity is really about? Who is on which side of the boundary, and who has the power to draw and enforce those boundaries?

I confess, I still haven't found that lesson in the Gospels. Perhaps I'm using the wrong translation......