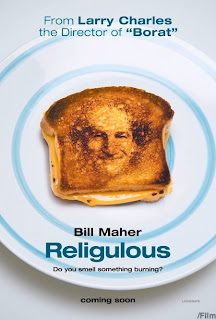 Something about 9/11 made some people crazy. Or maybe this is just the American character, and we have always needed an "Other" to define ourselves against. First it was Britain, then it was Europe (we've always had a love/hate relationship with Europe). For most of the 19th century it was the natives who where here before us, when it wasn't the slaves we imported to serve us, or the immigrants who were making this country what it is (and isn't) today. Then in the mid-twentieth century it became the Nazis and Japanese (mostly the Japanese; as Paul Fussell pointed out, no American went into battle in World War II crying "Remember Poland!"). After the war, of course, it was the Commies; and when the USSR collapsed, we went in search of a new enemy, and found it (or it found us) on 9/11.

Interestingly, during the Cold War the problem with the enemy was that they were "godless." Now the problem is the enemy has religion. Apparently one condition is as bad as the other, where the US is concerned. Which brings me to "Religulous."

I haven't seen the movie, and I'm not really interested enough to try to. But it raises interesting questions, little related to religion (from what I gathered in the Fresh Air interview with Bill Maher and Larry Charles, there's little in the documentary related to religion, either), but directed more at the question of the relationship of documentaries to truth.

It was Harlan Ellison who first pointed out to me (the thought may not have been original with him) that people had already decided that if it was on TeeVee, it was real. He recounted an experience with Dan Blocker when "Bonanza" was on the air: a fan came up to Mr. Blocker and began berating "Hoss" for the state of the "Cartwright" home. She couldn't be convinced that "Family" was not real. It's a short step from that confusion to confusing what's on a TV screen with what's "more real." An experience is now "more authentic" if it gets on TV: the traffic accident, the disaster we just lived through, the political rally or appearance of a celebrity: if you see it on the news, even though you were there, it's authenticated. Even in left blogistan, when the topic du jour is mentioned, even in passing, by Keith Olbermann or on "Saturday Night Live," it vindicates our interest and validates our concerns. If it's on a screen, it's "true."

But that's the working assumption of documentaries: if they can get it on the screen, it's "real." If you can't get it on screen, conversely, it must not be real. Seeing has truly become believing; and believing has boiled down to simply what we accept as true. (In a clip from the film played on Fresh Air, Maher asks a U.S. Representative if he "believes" in evolution. I didn't realize scientific theories were the subject to acceptance on the basis of belief; but such is the nature of our public discourse.) Most of life, of course, is not visual. It's too complex to boil down to a narrative that fits within 90 minutes of narration and visuals and "live dialogue." Funny how transcripts of a meeting or public event, or even the reconstruction of them, is valid in print reports, research papers, or any historical archive; but a "re-creation" on film, even with actors, seems less "authentic" and is always suspect when used for a documentary. The documentary is based on a simple assumption: seeing is believing, and what is seen is true. But is it? Is that how we conduct our everyday lives?

Larry Charles made a telling statement in the Terri Gross interview: he said they tried to contact the Pope and the head of the Mormon church and other religious leaders (all Christian, interestingly, or Western. No mention of Orthodox leaders, Buddhist monks, Hindu priests, Taoists, etc.), but there were "layers" (his word) of people designed to keep such persons from contact with the public, or at least Messrs. Charles and Maher. I wondered how many people I'd have to go through to get in touch with Mr. Charles, or the head of the studio distributing his film, or the heads of the TV companies who have broadcast his work; or the President of the United States, or any head of government or any major corporation. It was, in other words, a pretty mindless and petty complaint, and revealed more about Mr. Charles than about the religious leaders he sought out.

Mr. Maher followed the theme, pointing out that they had no trouble getting American religious leaders (of some stripe; I've seen no mention of the leaders of any of the mainstream Christian denominations being in the film) or simply believers, to talk to them. Mr. Maher explained that religious people in America are "media whores" (again, his term). This sets up a curious and convenient paradox: those who don't want to be on camera with Mr. Maher for this documentary are insulated cowards who won't face the "common man;" those who do are "whores" willing to do anything for attention. Hmmmm.....

Mr. Maher and Mr. Charles both say they consider religion dangerous. We've had this discussion before, and it really isn't worth belaboring, especially because of this documentary. The question now is: can a documentary document that danger? Can a documentary show the "true" face of religion in human experience, such that its risks and benefits can be considered? In the interview, Mr. Maher echoes the sentiments of Mahatma Gandhi, that the basic teachings of Christianity: respect the powerless, not the powerful; care for the poor, not the wealthy, are radical teachings (they are also fundamentally Jewish, though Mr. Maher doesn't seem to realize that), are good, and it's a pity they aren't more widely adhered to by Christians. How that adds up to religion being dangerous is a bit unclear, but apparently Mr. Maher equates "religion" with "Christian fundamentalists" (and I freely admit I'm basing that on Mr. Maher's comments and the Fresh Air interview with Stephen Waldman), and by some extension, Islamic fundamentalism. I understand Mr. Maher focusses his attention on Christianity, though, and apparently nowhere in his documentary can he consider that violence in the name of Islam is prompted as much by the foreign policy of America and Europe as it is by religious impulse. It's understandable, though, that Mr. Maher would consider Christian fundamentalists, rather like Sam Harris does, as the "true Christians." After all, they make such good subjects for a documentary. You can get them on film saying and doing outrageous things, usually quite unapologetically.

And if you can get it on film, it must be true, right?

Could you film the faith of Kathleen Norris, or Annie Lamott? Is their faith, then, false? Canyou put on film the spirituality of a Buddhist monk in meditation, a whirling dervish in ecstasy, a Muslim at prayer, a Trappist monk keeping a vow of silence, an observant Jew keeping kosher or observing the requirements of Torah? Or do you just show us something that keeps us at arm's length, something we see without feeling experiencing spirituality? How do you film this without simply showing pictures of people, and what meaning do such pictures have? Are they as compelling as interviews with mockable figures whom you strive to make foolish? According to the Fresh Air website, Mr. Maher "pos[ed] undercover as a man seeking spiritual guidance from various religious groups." Is that how you discern and film spirituality? By deception?

I can show you the actions of a person, and tell you what those actions mean: but I have shown you spirituality? I can show you the actions of a generous, caring, kind-hearted atheist, and of a deeply spiritual person, a Dorothy Day, a Thomas Merton. On film, will they look any different? How does one film motivations, interests, beliefs? Have I captured the truth and put it on the screen? Can I show you, or do I have to tell you? And if I don't discern a difference myself, is there no difference there? Or am I just missing something? If I miss it, is that the truth? Or am I misleading myself? Is seeing always believing? Or does seeing depend on something other than my eyes?

But the question of the documentary is the question of our devotion to the screen as the arbiter of what is real: If I can't get it on film, is it not true? Is it not real?

Maher says he admires the teachings of Jesus about poverty and powerlessness and the poor. What if he had gone looking for that, instead? What if he had tried to capture those teachings in a documentary? What would that look like? And would that, then, be real to the rest of us?