A small side note 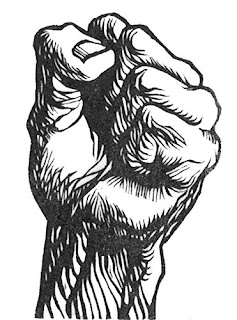 Massive post on the importance of being Reinhold to come, but just looking at the summary of Arianna Huffington's latest post this morning, I realized that almost everyone with an opinion is crediting someone else for whatever turnaround in American politics we may be about to witness.

Either Obama is a "movement," not a candidate; or the Intertubes have finally unclogged our democracy and given power to the people; or Americans are finally living up to the "progressive" opinions they supposedly express in polls but never at the polling place. And still nobody gives credit to the people themselves.

There has been a massive turnout in Texas early voting, and even though this is a deeply red state that will probably go for McCain, it's not the energy of the McCain/Palin ticket that's getting people out to vote. As the article says:

The first-day turnout was especially impressive considering that Texas is considered safely in the camp of Republican presidential nominee John McCain and has not been a focus of his opponent, Barack Obama.

And how big is the turnout?

From the blue-blood conservatives of Dallas to the yellow-dog Democrats of the Rio Grande Valley, voters showed up before the polling places opened and were still in line when they closed.

More than 15,000 ballots had been cast in Harris County by noon, a phenomenon repeated in all nearby counties and every major city.

Dallas County surpassed its record of 23,000 voters two hours before the expected end-of-day rush, leading election administrator Bruce Sherbet to say that if the trend keeps up over the course of the 12-day voting period "there's not going to be anything close to compare it to."

In Corpus Christi, the surge of first-day voters briefly overwhelmed a computer system that "wasn't ready to handle the load," election manager Rochelle Limon said, who added that the problem was fixed in 15 minutes.

Even in Galveston, where problems caused by Hurricane Ike give people plenty of other things to worry about, the first-day turnout was heavy, with more than 4,000 ballots cast.

After the Iraq war, followed by Katrina, followed by the meltdown of the financial markets and an Administration that first ran one way, then another way, then still another way (and a Congress which largely followed), I think people realize, once again, that government matters. More than that, they realize that their vote matters; that who is in office is not just a cynical choice between Tweedledum and Tweedledumber. Maybe they're turning out to vote for the new face; maybe they're turning out to vote against the new face. It doesn't matter.

They're turning out. And I think the people deserve the credit. Not some mystical force, new idea, new technology, or even "new politics." Just the people: plain and simple. We've called them "sheeple" long enough. Time to show 'em a little respect.