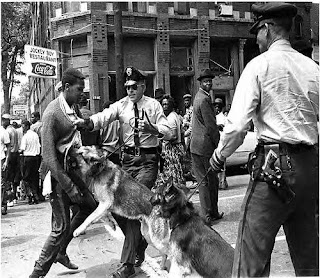 As one who was a victim of violence and hate during the height of the Civil Rights Movement, I am deeply disturbed by the negative tone of the McCain-Palin campaign. What I am seeing reminds me too much of another destructive period in American history. Sen. McCain and Gov. Palin are sowing the seeds of hatred and division, and there is no need for this hostility in our political discourse.

During another period, in the not too distant past, there was a governor of the state of Alabama named George Wallace who also became a presidential candidate. George Wallace never threw a bomb. He never fired a gun, but he created the climate and the conditions that encouraged vicious attacks against innocent Americans who were simply trying to exercise their constitutional rights. Because of this atmosphere of hate, four little girls were killed on Sunday morning when a church was bombed in Birmingham, Alabama.

As public figures with the power to influence and persuade, Sen. McCain and Gov. Palin are playing with fire, and if they are not careful, that fire will consume us all. They are playing a very dangerous game that disregards the value of the political process and cheapens our entire democracy. We can do better. The American people deserve better.

Sen. McCain, not surprisingly, resents the implications, as well as the direct accusations, of this statement:

Congressman John Lewis' comments represent a character attack against Governor Sarah Palin and me that is shocking and beyond the pale. The notion that legitimate criticism of Senator Obama's record and positions could be compared to Governor George Wallace, his segregationist policies and the violence he provoked is unacceptable and has no place in this campaign.

I am saddened that John Lewis, a man I've always admired, would make such a brazen and baseless attack on my character and the character of the thousands of hardworking Americans who come to our events to cheer for the kind of reform that will put America on the right track."

I call on Senator Obama to immediately and personally repudiate these outrageous and divisive comments that are so clearly designed to shut down debate 24 days before the election. Our country must return to the important debate about the path forward for America.

A campaign that has prompted those attending McCain/Palin rallies to shout "Terrorist!," and "Traitor!," and one woman to call Obama, obviously disparagingly, an "Arab," a campaign where McCain's attempts to say anything about the quality of Mr. Obama's character was roundly booed, is not a campaign that is engaged in "legitimate criticism of Senator Obama's record and positions." By now, does that really have to be spelled out? The only difference between McCain's campaign now, and Wallace's campaign against desegregation then, is that Sen. McCain has not yet provoked any violence. That is a very thin distinction, indeed. Sen. McCain clearly doth protest too much.

Sen. Obama doesn't have to denounce and reject these remarks (the favorite phrase earlier in the campaign, when Rev. Wright's comments were so controversial). Rep. Lewis' moral gravitas allows him to stand alone in both his opinions and his responsibility for them. Sen. Obama can simply leave them be.

John Lewis has long ago earned the right to speak for himself, and to speak to these kinds of issues with an authority that deserves our respect. If John McCain has lost any moral authority to be outraged by such comments, he need only look in the mirror to see who took it from him.

“I think there have been quite a few reporters recently,” said Mr. McCain’s closest adviser, Mark Salter, “who have sort of implied, or made more than implications, that somehow we’re responsible for the occasional nut who shows up and yells something about Barack Obama.”

The comment about Obama being an Arab (apparently she said "Arab Terrorist") is the first time McCain actually responded to these outrages. Earlier, he'd merely grinned and gone on. This isn't lost on anyone, despite Mr. Salter's attempt to blame the messenger.

And if that isn't enough, POW:

"Look, Chris, I think we have to take this very seriously," [McCain campaign manager Rick] Davis told Fox News Sunday host Chris Wallace. "And the kind of comments made by Congressman Lewis, a big Obama supporter, are reprehensible. The idea that you're going to compare John McCain to the kinds of hate spread in the '60s by somebody like George Wallace is outrageous. Where was John McCain when George Wallace was spreading his hate and segregationist policies at that time? He was in a Vietnam prison camp serving his country with his civil rights also denied."

"Nobody knows sacrifice like John McCain does," said Davis. "And the idea that Barack Obama didn't address this issue directly, had his campaign walk out there with a half-baked statement that didn't even address the comments made by Lewis as related to John McCain. Barack Obama should apologize to John McCain directly for the kinds of comments made by John Lewis yesterday and that should be the end of this sordid affair."

Can we go now?