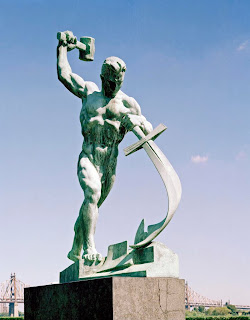 The swords, the plowshares, are provisions for the flesh. They gratify its desires. Have we thought what it would be to give those things up for Advent? To prepare the way of the Lord by renouncing those desires of the flesh, and really, truly, this-time-we-mean-it, ask for peace?

Probably not. But I'll bet we've already thought about what we want for Christmas. And how much it's going to cost this year to satisfy what everybody else wants for Christmas. And none of it involves swords, or plowshares, or peace. All of it, without fail, involves provisions for the flesh.

Which is not to say bodily needs are bad. But what do we do when those have been met? Even Maslow's hierarchy is fairly easily satisfied, and should push us on rather quickly to self-actualization. But all our needs seem to push us toward is more needs. Our houses overflow with goods, and yet we camp out before stores to be first in on Black Friday, or go out shopping Thursday night before the turkey carcass is cold, desperate to buy what we don't need for people who have too much already, and to get it at the best price possible so we have more money left over to buy even more of what we don't need but insatiably want anyway. The night is far gone, the day is near," but we don't "lay aside the works of darkness and put on the armor of light," we just make further provisions for the flesh, for which we seem to need more and more provisions every year. When do we finally start the work of self-fulfillment? When is enough finally enough?

Advent used to be a "little Lent," back when the Church ran the calendar and nobody much cared about the time of year except for what holiday was coming up next, and when holidays were really holidays. Already major chains are open on Thanksgiving Day, having pushed it back from midnight on "Black Friday." It's only a matter of time until stores are open until 9 a.m. on Christmas morning, and offering sales and deals buyers can't refuse to lure them in. Back when it was the Church's calendar, and not the world's, Advent was a season of preparation, and the preparation was not holiday parties that had to start earlier and earlier in December because everyone is busier and busier by December 24th, everyone has more and more to do and less and less time to do it between the 4th Thursday in November and the 25th of December. Advent was a preparation for the coming of the Christ, not for the biggest shopping spree of the year, and the most stressful and unnecessary celebration of excess that modern industry can provide. The unexpected hour almost meant something then; all it means now is the fear that you've forgotten someone, or that what you bought earlier is on sale for even less just before Christmas Day, and you could have used the extra money to buy something else.

Lent, we know, is all about giving something up. Something usually small and conveniently overlooked for six weeks, because it's the thought that counts, right? Advent is not about giving anything up, which is why the idea of Advent as a four week Lent is especially hard to consider. What if we made it about giving up, though? What if we made it about beating swords into plowshares, because plowshares are so much more useful than swords. What if we made Advent about going up to the the mountain of the LORD, to the house of the God of Jacob so that God may teach us God's ways and that we may walk in God's paths? What if we took seriously that the coming of the Son of Man would be when we least expected it, when we were least prepared, and so we must always be ready? How ready can we be if we are worried about which sales to follow, which store to check for the best prices, and how many gifts need to be under the tree or in the mail this year? And if we aren't ready, would we miss it? Would it pass us by, and we'd never know?

Jesus isn't really all that concerned with predicting a day and a time when the eschaton will occur. He doesn't really predict an event we can't help but notice, an apocalypse all humankind will have to acknowledge all over the world and all at once. The time of the Son of Man can be anytime, in any life, at any place. If you weren't ready, if you weren't paying attention, if you were preoccupied with the holiday social calendar and the gift getting and giving lists and the sales fliers and store advertisements, you might miss it as readily as the homeowner who slept through the thief breaking into his house. The homeowner didn't see that one coming, either, and didn't know it was over until it was too late. Maybe that's the lesson for us: not that the time is coming and we can set our calendars by it and plot our shopping days and get the mailing of packages and Christmas cards lined up and everything pulled off by a date certain. Maybe it's not that, but that we were asleep while we were wide awake, and missed the opportunity to take that sword and beat it into a plowshare. We missed the chance to go up on the mountain and learn from the Lord the ways of life, of self-fulfillment, of life into the ages.

We could easily miss Christmas, preparing for Christmas. Not just the "spirit" of the "season," but the very idea of "holiday" itself. We could pass it all by, fritter it all away, prepare so hard for what is expected of us that we aren't prepared at all, that we are asleep at the very time we need to be awake. We could so easily have stolen from us, right from under our noses, what we wouldn't have lost at all had we been awake, had we been paying attention, had we paid attention to what was important. The thief is us. The thief is time. The thief is shopping days and expectations and preparations that prepare us to prepare to begin to prepare. But prepare for what? For spending and getting and unwrapping? Or for what we least expected? And what would that be? An end to the endless cycle? A replacement of the cycle, of the repetition, with purpose? An end to needs only, and a beginning of finding what is valuable, and what is worthwhile? Holidays are good, but we don't spend them anymore: they spend us. Family is good, but we don't see them at Christmas; we see only needs we have to fulfill, gifts we have to give, presents we have to provide. Advent has a purpose; it is meant to stop and wake us up. But we are going to sleep through it again; and our time is going to be stolen from us again; if we don't stop and wonder why we need so many swords, and why we have so very few plowshares. If we don't stop and think about who is robbing us, and what is being stolen, and why it happens again and again every year at this time: at the end of the year, at the beginning of the year, at the end that is the beginning, the beginning that is the end.

We have made provisions for the flesh. We've made them several times over. That job is done. The night is far gone. It's time to wake, and realize that, and think about what we are doing it for. What we are doing all of it for.

For the sake of my relatives and friends I will say, "Peace be within you."

For the sake of the house of the LORD our God, I will seek your good.

And to mean, as the Psalmist did, the good of all.