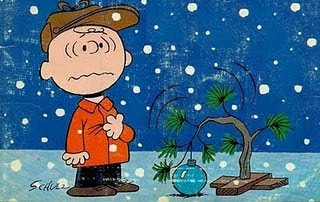 I'm prouder of this than I should be, so I return it to pride of place as the Christmas season roars out of the station and bears down upon us, we who are trapped on the tracks or have fallen off the subway platform (if you prefer) of Thanksgiving, running as fast as we can to stay ahead of it between now and December 25th. I really agree with Bill McKibben that there are better ways to do this, and every year I try more and more to practice them (about which I have posted far less than I imagined I had; maybe somebody should do something about that, huh?).

But to begin with, let's put Christmas in perspective, something that post from last year was intended to do. The entire series of posts (an inadvertent series, at best) are here, if you want a longer view. That's just on the history of Christmas (which is not the simplistic subject most of us imagine it is. There are no straight lines in history at all; of that much, at least, I am sure.). On the subject of Christmas itself, well; I've said too much already. And if I'd started out with tags from the beginning, I'd point it all out to you now.

None of which will stop me from saying even more in the future, of course. In the meantime, in the words of the old E&R blessing, may it be unto you according to your faith. Whatever faith you have.