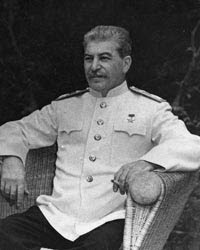 The line from Stalin (which apparently comes to us through Churchill) was: "The Pope! How many divisions has he got?" It was used, in my youth, to point out what a ruthless bastard Stalin was.*

JUAN MENDEZ: Mr Bush hides behind the fact that he is not a lawyer and he has this folksy you know kind of cute way of say, well the lawyers told me it was legal, as if he didn't know that it's immoral. You know? Immoral and illegal. I mean he can't really hide behind his lawyers.

I mean he was very hypocritical of him to say something like that. I mean it's been so clearly established that those memos were, they don't even deserve the name of legal memos because they are completely flawed from the legal reasoning. But even worse they are morally flawed as well.

I don't think I've heard anyone in America mention the moral problems of torture. Is this another case of American exceptionalism? Or is it because we know the Pope has no military divisions?


*of course, it was also used to point out how ineffective moral reasoning was in the "real world." So maybe I shouldn't be surprised after all.