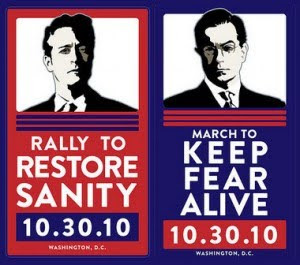 If we amplify everything we hear nothing. There are terrorists and racists and Stalinists and theocrats but those are titles that must be earned. You must have the resume. Not being able to distinguish between real racists and Tea Partiers or real bigots and Juan Williams and Rick Sanchez is an insult, not only to those people but to the racists themselves who have put in the exhausting effort it takes to hate--just as the inability to distinguish terrorists from Muslims makes us less safe not more. The press is our immune system. If we overreact to everything we actually get sicker--and perhaps eczema.

In the old days, we used to distinguish between "prejudice" and "racism." "We," of course, meaning "white people." We carefully distinguished simply "bad" comments about race (for blacks or Jews, because for reasons I've never understood, Judaism is a race and a religion) from truly bad comments about race. The latter were "racist" and made only by "bigots," bigots being distinguished from the merely prejudiced because they were unapologetic about their views. The merely prejudiced could always be counted on to say they had nothing against other races, or some of their best friends were of that race, but still....

And like the U.S. military saying we don't intend to kill civilians, but in making omelets eggs must be broken and in conducting air raids on terrorists, civilians must die, somehow the qualification was supposed to make it all better.

Now, as someone who declared Juan Williams' provocative comments to Bill O'Reilly "racist," I'm not backing down from what I said when I say I can see Stewart's point: sort of. We do have a problem of overreacting to everything, and the press should be our national immune system. But Rick Sanchez and Juan Williams were fired because they overstepped the boundaries of their public positions. Sanchez has pretty consistently portrayed a journalist, and Williams has insisted, and been presented, as one on NPR (although he's never there except as a commentator). You can actually be a racist and say outrageously racist things and stay on the air. The prime example is Pat Buchanan. But you can't do those things if you are perceived, or portray yourself, as a journalist.