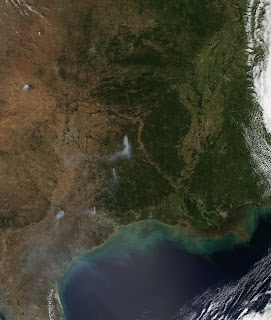 In Texas, firefighters aren't just battling the wild fires raging around Austin and Houston. The state's first responders have also had to deal with budget cuts affecting everything from fuel purchases to hoses and oxygen tanks.

In some cases, fire officials say, firefighters have had to pay out of pocket for basic necessities like proper protective gear and fuel to get them to the scene. One fire department that battled the blazes in Bastrop County had to pay for a hose, recalled Bastrop City Fire Chief Henry Perry, speaking to The Huffington Post during a break from working the wild fires.

"That fire department has been on this fire every day," he said. "Before this fire, they were having to buy stuff out of their own pocket." Perry said he knows of at least one other department whose firemen had to pay for equipment maintenance and engine fuel.

Meanwhile, back at the ranch....

Some residents yelled at Texas Lt. Gov. David Dewhurst when he visited the command center in Bastrop County Friday, asking where Perry is and why they haven't had any housing help.

Wildfires have destroyed nearly 1,400 homes about 25 miles from Austin.

Perry, running for the Republican nomination for president, interrupted his campaign and returned to Texas for two days before heading to California for a debate Wednesday. He is now fundraising in California.

Perry's office said "everything that needs to be done to respond to these fires is being done."

Dewhurst said the White House hasn't yet replied to a request for federal aid.

Dewhurst is an elected official, not Perry's right-hand man; but he's a Republican. And what he actually said was:

“Because so many fires are burning across the state, our resources are spread pretty thin. That's why we need the federal government to step up to the plate immediately.”

Except, of course, state resources aren't spread thin because of an act of God.

Earlier this week, HuffPost reported that Gov. Rick Perry, the GOP front-runner for president, had signed off on millions in firefighting cuts as part of the state's most recent budget legislation. The Texas Forest Service's funding has gone from $117.7 million in the 2010-2011 budget years to $83 million in the 2012-2013 budget years.

Gov. Rick Perry, currently the frontrunner among GOP presidential candidates, has been forced to press President Obama for more than $50 million in federal aid. At the same time, he defends the state's decision to slash by 74 percent the funding for the volunteer fire departments who do most of the work, and to cut the Texas Forest Service's budget by 34 percent, down to its 2008 level.

But what some have called Texas' “slash and burn” approach to balancing its state budget has left volunteer firefighters, who do about 80 percent of the work, in a lurch. Just last week, the most recent budget cuts meant 90 Texas Forest Service employees were laid off. Some volunteers pay for expenses out of pocket. And the repeated emergency calls are stressing equipment like tankers and pumpers not built for continuous use.

On Thursday, one of the Tomball tankers blew a transmission, leaving [volunteer firefighter David] Hill on the sidelines as the Magnolia fire flared up, cutting across fire lines and highways, and forcing hundreds to rapidly flee their homes. Nearly 100 homes have been lost as a thick haze floated into Houston.

This is why you don't elect Aggies.

Photo is from the NASA Aqua satellite.