Regarding the Deaths of Others 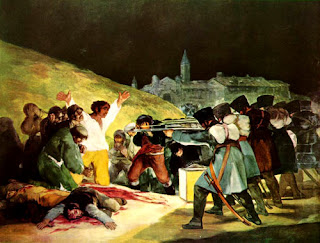 I'm going to give up reading the news. It's too depressing.

Thoreau was right, too much of it involves situations in which I am not involved, and in which I have no interest. On the other hand, Derrida was right, and we can't seem to imagine that our deaths are possible. Your death, certainly; but mine? Heaven forbid!

GINGRICH: Historically, we had charity. We had places that say, if you are down on your luck, if you failed to be responsible, we will take care of you, but that doesn’t mean that you’re necessarily going to get a private room, that you’re necessarily going to get everything somebody would get who’s been prudent and who has taken care of themselves. [...] Yes, we’re going to make sure they’re taken care of, but they ought to understand that’s charity.

BLITZER: But that money should come from charitable organizations, not from taxpayers? Is that what you’re saying? [...]

GINGRICH: I would prefer to see it come from charitable organizations.

A man who has never had to rely on the kindness of strangers to pay his medical bills is the best representative of the idea that others should do so because, after all, their deaths are perfectly imaginable.

My death is a cruel hoax against the idea of a loving God. Your death, however, may well be a convenience.

And besides, the poor are not dying from poverty, they are dying because of the government. Which means their deaths are not my responsibility:

The golden thread here is responsibility; yours, not mine. I've been responsible and avoided serious illness. You, on the other hand, were imprudent, and got sick. Or you were imprudent and were born poor and never worked your way up to wealth. Which is sort of like saying every little boy who enjoys a sport is imprudent if he doesn't become a professional athlete, although the number of professional athletes is a vanishingly small percentage of the entire population of males (I exclude females for simplicity's sake). Clearly if you were prudent you would be a wealthy white male like Rand Paul or Newt Gingrich, and medical care wouldn't be a concern for you (since prudent white males also avoid getting sick).

Or you were imprudent and lost your job and with it your medical insurance. Sucks to be you, but that's what being imprudent gets you. What am I, your keeper? Who are you, my brother? My sister? What a ridiculous idea! Where do you get a silly idea like that?

Rand Paul is most likely an atheist, but Newt Gingrich wraps himself in religious language whenever it suits his purposes. Religion doesn't, or rather shouldn't, teach us to be selfish and greedy and self-concerned. Christianity, at least, has a definite answer to the question: "Am I my brother's keeper?" And the answer is not: "Yes, but only through a government approved charity." Christianity also understands the nature of the struggle represented here by politicians and crowd reactions.

"When you start a fire, you want it to burn." Dom Crossan attributes those words to Jesus of Nazareth. He bases it on Luke 12:49: "I came to set the earth on fire, and how I wish it were already ablaze!" Frightening words; disturbing words. And no wonder we seldom hear them preached about, or regard them in some spiritual fashion, akin perhaps to the "tongues of flame" Luke later describes at Pentecost, or to a fire of faith and conversion often associated with mass, and safely historical, events like the Great Awakening. But you don't have to take the words literally to take them out of the safe remove of "Oh, that's just God talking." Think about it a moment: the wisdom of the metaphor is clear. When you start a fire, you do want it to burn. Unless you are an arsonist intent on destruction, that's not a bad thing.

Quite by coincidence, considering how to end this post, I ran across this from Matt Yglesias:

Conservatives write and call Congress at a much higher rate than progressives, and more-or-less ordinary people hear conservative political messages from preachers and business executives all the time.

The conservatives, the people who blame the poor and hate the immigrant and even those who want the uninsured and the criminal to die, are all anxious to start a fire which will burn down what they see is wrong with this country, with this society, with us. Obviously I think that's a bad thing, that their fire is arson, that their goal is destruction. But what about us? What fire could we start? What goals do we have that we want to see effected, what defense of the poor do we offer, what changes would we propose to counter the arguments of Newt Gingrich or Rand Paul? How do we respond to the crowds that cheer for death? Do we cluck our tongues, or do we answer them? Is this the society we want to live in? If not, what are we doing about it? We need a challenge to our complacency. We need to be willing to start our own fire. We need to be willing to let it burn.

Is something missing? Is something needed? Then why don't we find it? Why don't we have it? What are we missing? What do we need? What do we believe? Nothing? Then we should be ashamed of ourselves. What do we believe? Something worth believing? Something worth living for? Something worth starting a fire for? If we don't, what good is it? Discard it, and find a belief worth something. Pray, sleep, eat, meditate, read, confer, worship, sing, shout, whisper, be perfectly still and silent. Whatever it takes, but do it! What is missing? What? Find it! Go out, now, into the world, into the void, into the mystery, into the deepest depths of your soul or the uttermost parts of the world, but find it! Take it with both hands and run laughing back to the caves with the fragment of fire that burns your hands but that you know will light the world! Something is worth it! We are better than this! We know we don't have to suffer this! We know they are wrong, we know we must oppose them, we know they would burn the world down and we would make it burn brightly and light the world up, not leave it a cinder! We know this, we know this, we know this!

It's time we did something about it. "My death, is it possible?" Maybe this is your death, this uselessness, this inactivity, this listlessness. Maybe this is your death, and you should be out seeking your place of resurrection. What are you waiting for! Go! Do it! Find it! Find God! God is out there, among the poor, among the tired and the criminal and the downtrodden and the feeble and the sick and the lame, God is there waiting for you to figure it out and join them and light up the world with them! What else do you have to do with the rest of your life?