Living in Hell and Renting out Texas... 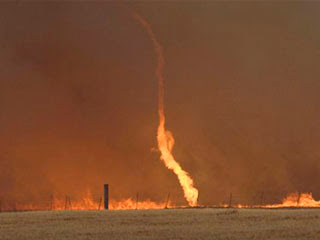 ...is looking better and better.

You want a picture of what Texas looks like right now, go here. As I type, this is the information:

BASTROP COUNTY COMPLEX, Bastrop County. 14,000 acres, no containment. Heavy airtankers and single-engine airtankers assisted on this fire that started in the Lost Pines area just northeast of Bastrop. The fire has moved unchecked for at least 16 miles to the south and has jumped the Colorado River twice. The Circle D, K.C. Estates, Pine Forest, Colovista and Tahitian Village subdivision have been evacuated. Firefighters are trying to hold the fire at FM 2571. Reports indicate possibly 300 homes have been destroyed. MODIS satellite image indicates the fire has jumped Highway 95 and is approximately 25,000 acres. [Note: there are a lot of rivers in Central Texas that are little more than creeks in the summer. The Colorado River is not one of them.]

#491, Limestone County. 3,000 acres, unknown containment. Six homes were saved and one was lost on this fire 20 miles east of Waco.

DELHI, Caldwell County. 1,000 acres, 10 percent contained. Twenty homes were saved and six were lost on this fire east of Lockhart.

#545, Upshur County. 500 acres, 50 percent contained. One hundred homes were saved; none lost. The fire is burning East of Gilmer.

#502, Nacogdoches County. 200 acres, unknown containment. More than a dozen homes have been evacuated, but none lost.

*Note: No current updates available except on the 101 Ranch Fire.

101 RANCH, Palo Pinto County. 6,555 acres, 75 percent contained. The fire is burning on the south side of Possum Kingdom Lake near the town of Brad. Thirty-nine homes and nine RVs have been reported destroyed.

CEDAR TRUCK COMPLEX, Kimble County. 357 acres, 80 percent contained. Thirteen homes were saved on this fire burning just west of Fort McKavett. This was a combination of 34 different starts along a 24-mile stretch of highway.

That's almost 53,000 acres ablaze; some contained, some not. 63 of the fires are new as of Sunday. 251 out of 254 counties have burn bans in effect. There has been, effectively, no rain to speak of in the state all summer, and low rainfall amounts going back to January. There were no thunderstorms in the state this weekend.

But it was Labor Day weekend, and it's our God-given right to cook outdoors. Which is probably how most of these fires started; the ones that didn't start because some pick-up was dragging the chain used to secure a trailer on the hitch.

Honestly, I do wonder how stupid people can be.

Update: yes, as Mimi notes in the comments, Perry did return to Texas because of the wildfires. Where he immediately expected help from FEMA and sought help from US military equipment at Fort Hood.

No mention yet of how his last state budget cut funding for firefighters. I guess allowing Washington, D.C. to "interfere" by making up for Texas' failure to pay its own way is not a violation of states rights. Or something. I'm sure there's a Tenther argument for this somewhere.

Also: I calculated the number of acres of Texas on fire by totaling up the acreage in the list above. Turns out I'm off by about 700%. The amount of acreage currently on fire is: 3,538,852. As of today, there are three new fires in west Texas, and 14 new ones in East Texas.

This isn't going to get better anytime soon.