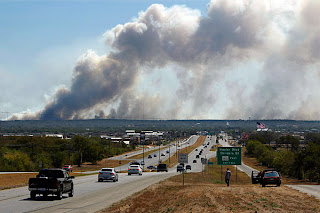 These maps at The Atlantic about the Texas wildfires are helpful; I guess. Yes, for example, if the fires were confined to one place, they'd encompass most of the Houston metropolitan area (it may look like Houston and everywhere else on the Atlantic map, but trust me: that's all just "Houston," whether it's technically the city of, or not. You don't feel like you are "out of Houston" until you get past Sealy to the west, or Galveston to the south, or The Woodlands to the north.)

My only point being: Texas IS that big. This map puts that into some perspective. But to put the whole thing in perspective, you can leave Houston (on almost the Gulf coast) on I-10 heading west, and not reach El Paso for another 12 hours or more (depending on how often you stop). And you'll still be in Texas, and only about half-way to the California coast.

3.5 million acres ain't tiny, don't get me wrong. But it really is basically the Houston SMSA. Or at least, the Houston footprint. Which is why we can have the state of Connecticut burning in Texas, and still function.

Not that I don't keep imagining the trees around me being on fire. And not being comforted that they aren't.