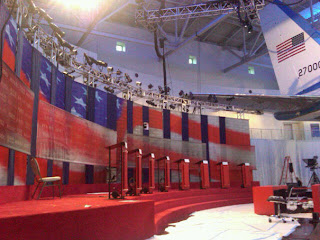 Just wondering if this will enter the media mainstream, or be lost as the narrative closes over it as skin would a wound, leaving not even a scar.

Last night Rick Perry called President Obama an "abject liar." Rachel Maddow's panel on MSNBC made much of it last night, but I haven't heard that clip repeated this morning on NPR, and I'm not seeing it prominently mentioned in any stories on the debate. Google doesn't turn up any news story containing the words "Perry Obama liar," either. MSNBC noted, in the second hour (0r was it third? Post-debate coverage ran longer than the debate by several hours) that Perry was flat out wrong in claiming El Paso was a dangerous border city, citing FBI and other statistics to back up Obama's statements (the ones Perry said were lies).

I'm being vague because I'm going on memory, not news reports, because there don't seem to be any (and I'm too lazy to search the transcript). MSNBC doesn't have anything about it in their AP report "fact checking" the debate, and even Politifact only has an article from 5 days ago which touches only on the "he said, she said" when Perry first made this claim.

So, first, what are the repercussions of a sitting governor declaring a major city in his state too dangerous for people to live in? Think El Paso wants that kind of publicity, especially when it's not true? Second, and more interestingly, a GOP candidate for President called the sitting President "an abject liar." What, that isn't news?

Is "liar" such a perjorative term that, like "the 'n' word," we have to disappear it from political discourse, and pretend it was never spoken? Can we not even mention "the 'l' word"? Or is it because that's taken?

Interesting what disappears down the memory hole, no?