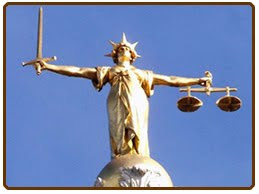 It is announced wherever, reflecting without flinching, a purely rational system of analysis brings the following paradox to light: that the foundation of law--law of the law, institution of the institution, origin of the constitution--is a 'performative' event that cannot belong to the set that it founds, inaugurates, or justifies.

I'm a little hesitant about these "either/or" arguments, such as: either Dick Cheney is prosecuted as a war criminal, or he will "be feted—and further enriched—as a Wise and Serious Statesman ..." Both sides assume that finality is achievable in this life, and that the final outcome will bring with it the final revelation.

Dahlia Lithwick makes the case quite eloquently for a form of judicial realism, the idea that the law is only what is practiced, not merely what exists on paper or is upheld as the ideal we all agree to, even as we honor it more in the breach than in the keeping. But the logic of her argument doesn't hold up to scrutiny: are traffic laws abandoned because every day on the streets I see another one violated by some reckless or merely foolish driver? I appreciate the distinction that law enforcement somewhere is trying to enforce traffic laws so, even if some violate the law with impunity, elsewhere the rule of law is upheld and so overall, the law itself is vindicated. I even want to agree that a complete unwillingness to prosecute Dick Cheney and others for war crimes indicates that 16 US Code 2340 may be meaningless. But, as Matt Yglesias points out, if you bring a prosecution against such a high profile defendant and lose, what does that say about the rule of law? Are we damned if we do, and damned if we don't? And if so, what is the rule of law, except a myth or worse, a chimera?

Every criminal prosecutor has to decide when to bring a criminal case against a defendant, and it is usually easier to bring cases against poor defendants than against criminal kingpins, if only because the poor defendants can't hire good lawyers. Of course, the real decision is made on the evidence one can present at trial, and also on the likelihood of a conviction. That's another reason poor, unimportant defendants make more appealing targets than rich, well-regarded ones. The O.J. Simpson criminal trial was the norm, not the exception. Criminal law history is littered with murder cases brought against wealthy, well-regarded defendants who escaped justice, or escaped an improperly brought murder charge (depending on your point of view) precisely because they can hire good lawyers, and they come into court with the benefit of the doubt.

Dick Cheney would probably benefit from being a former Vice President, if not from being a white man. I'm not kidding. The prosecution would be sanctioned by the first black President, and overseen by a black Attorney General, and Rush Limbaugh, among others, would not hesitate to play the race card. The hue and cry about prosecuting an elected official from the Administration you just replaced would probably override all considerations of justice or of the legality of torture. And besides, Cheney has a point: no Americans were tortured. No, that's not the standard of the law, but it would be a powerful tool in the arsenal of the defense. Victory would be uncertain, if not almost impossible. And when the jury vindicates Cheney's defense, where does Lithwick's analysis turn to assert we are still a government of laws and not of men? How is the rule of law vindicated when a jury of Cheney's peers decides he's not guilty of any crime? Do you see the problem? If the rule of law exists only when it reaches the outcomes we want it to in even one particular situation, then it doesn't exist at all; because then we are no longer upholding the rule of law, we are merely upholding our desire for judgment.

And one of the key principles of the rule of law is that judgment is not left to us, or to anyone. Judgment is left to the legal system. Judgment is not ours, no matter how outraged we are, to guarantee. Dahlia Lithwick is a lawyer; Glenn Greenwald is a lawyer; it is a bit disturbing that they don't understand this.

Would I like to see Dick Cheney imprisoned for his crimes? Yes, I would. But unless we suspend the rule of law, I cannot guarantee that outcome, and with the rule of law I can almost guarantee he will be exonerated by a jury. Does this mean the rule of law has vanished like a soap bubble? If it does, then there is no rule of law, there is only the rule of power, and "the rule of law" is a nice way of lying to ourselves about ideas like justice and fairness and equal protection, because what we really mean is the government (which is the courts, the police, the prisons) should follow the popular consensus and lock up people who outrage our social conscience. And if Cheney doesn't outrage our social conscience, he should, so we should lock him up anyway, to teach the rest of American society the proper lesson. If the rule of law exists only as an exertion of power against the criminals we despise the most, then the conclusion that there really is no rule of law is the only conclusion possible.

If, on the other hand, the rule of law has any meaning at all, it means the outcomes we desire don't always come true. That's why it's the rule of law, not the rule of popular opinion, or public consensus, or the desires of those with the power to make it happen RIGHT NOW! Either the rule of law is an idea with a meaning of its own that exists apart from judicial systems and judicial outcomes, or it is no rule at all.