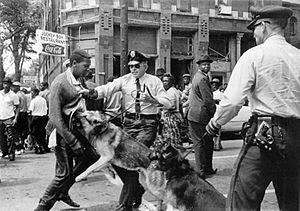 Cops are dragging kids away by the hair. They're whacking people around and then preventing medical personnel from responding to treat their wounds. The whole world is, indeed, watching. And it's trying to make up its minds.

It's easy for all of us to say that. We didn't get our heads cracked. We didn't get our belongings trashed. We didn't have our free library tossed gleefully into dumpsters. (An action which, to call it philistine, is to insult the cause for which Goliath gave his life.) We don't have the anger rising in us, except by proxy. Nevertheless, it can't end in images of bleeding cops and tossed barricades, and a CNN spokesmodel named Alison Kosik telling all of here at Gate 29 about how the brave brokers of her acquaintence have accepted these inconveniences as "business as usual." CNN is posing the members of the financial-services industry as the last gunners at Fort Zinderneuf. This is not good.

What I know is that John Lewis nearly got killed at the Edmund Pettus Bridge, and he never threw a punch back in anger. I empathize with the feelings of the people who have been subject to the ludicrous reaction of hyped-up cops with new military weaponry, and then subject to the contempt and condescension of a greasy little plutocrat like Michael Bloomberg. But this cannot be the way it ends. A few days of ghastly videos — and photos like those below — and out comes a new narrative that in a dozen different ways excuses the bloodletting and then minimizes it, while strangers wait for airplanes, silent applause in their eyes.

Then, last September, came the opportunity to talk with leaders of Birmingham's economic community. In the course of the negotiations, certain promises were made by the merchants--for example, to remove the stores' humiliating racial signs. On the basis of these promises, the Reverend Fred Shuttlesworth and the leaders of the Alabama Christian Movement for Human Rights agreed to a moratorium on all demonstrations. As the weeks and months went by, we realized that we were the victims of a broken promise. A few signs, briefly removed, returned; the others remained. As in so many past experiences, our hopes had been blasted, and the shadow of deep disappointment settled upon us. We had no alternative except to prepare for direct action, whereby we would present our very bodies as a means of laying our case before the conscience of the local and the national community. Mindful of the difficulties involved, we decided to undertake a process of self purification. We began a series of workshops on nonviolence, and we repeatedly asked ourselves: "Are you able to accept blows without retaliating?" "Are you able to endure the ordeal of jail?" We decided to schedule our direct action program for the Easter season, realizing that except for Christmas, this is the main shopping period of the year. Knowing that a strong economic-withdrawal program would be the by product of direct action, we felt that this would be the best time to bring pressure to bear on the merchants for the needed change.

"This response to a published statement by eight fellow clergymen from Alabama (Bishop C. C. J. Carpenter, Bishop Joseph A. Durick, Rabbi Hilton L. Grafman, Bishop Paul Hardin, Bishop Holan B. Harmon, the Reverend George M. Murray, the Reverend Edward V. Ramage and the Reverend Earl Stallings) was composed under somewhat constricting circumstances. Begun on the margins of the newspaper in which the statement appeared while I was in jail, the letter was continued on scraps of writing paper supplied by a friendly Negro trusty, and concluded on a pad my attorneys were eventually permitted to leave me. Although the text remains in substance unaltered, I have indulged in the author's prerogative of polishing it for publication."

There is a difference between then and now. But until people started seeing scenes of passive marches being rolled down the street by water cannons, being mauled by dogs, being beaten bloody by policemen, they didn't start to sympathize with Dr. King and the Movement. Dr. King understood this. Consider how he begins his famous letter:

While confined here in the Birmingham City Jail, I came across your recent statement calling my present activities "unwise and untimely." Seldom do I pause to answer criticism of my work and ideas. If I sought to answer all the criticisms that cross my desk, my secretaries would have little time for anything other than such correspondence in the course of the day, and I would have no time for constructive work. But since I feel that you are men of genuine goodwill and that your criticisms are sincerely set forth, I want to try to answer your statements in what I hope will be patient and reasonable terms.

Then think again about where he is when he is writing it.

I've used King's letter to teach rhetoric, to teach Aristotle's elements of argument, which are: ethos; logos; pathos; and kairos. Before you can even begin, Aristotle understood, the speaker must have a good ethos, a good ethic. A pedophile may make a perfectly sound argument, but who will give a pedophile the benefit of the doubt to listen? Dr. King understood this, which is why he downplays the fact that he's writing from jail. Today we canonize him; in 1963, he was considered a criminal and an "outside agitator."

Like Charles Pierce, I hope the Occupy movement doesn't end this way, but I'm afraid it will. The effort to be non-violent in the face of violence is a very deliberate effort. It is a religiously grounded effort, from Gandhi to King. Religion may not be a necessary concomitant of morality, but it can profoundly affect the morality people live by.

People will judge on what they see and what they think they understand. It's unfortunate if the Occupy movement doesn't better understand that.