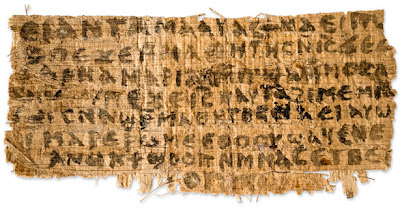 Let me take a moment to upend some of this before it becomes ridiculous (Hah!  As if I had that power!  Nonetheless....).

As the article points out in the middle (rather than at the breathless beginning):

She repeatedly cautioned that this fragment should not be taken as proof that Jesus, the historical person, was actually married. The text was probably written centuries after Jesus lived, and all other early, historically reliable Christian literature is silent on the question, she said.

And this isn't the first time in human history that anyone has suggested Jesus was married.  There was the old legend of the last temptation of Christ, where Satan returned to Christ on the cross and offered him a vision of a normal life, with a wife and kids.  Nikos Kazantzakis wrote a wonderful novel on that legend.  (Does anybody read Kazantzakis anymore?  They should....).  There was an argument I heard about in seminary, that because Jesus was called "Rabbi," it implied he was married, since rabbis were supposed to be married men. (I have no idea if that is even true, about rabbis and marriage, nor when the term "rabbi" actually became a term associated both with leadership in Jewish communities, and so with marriage as a concomitant of being a community leader.  I'd also note the only consistent reference to Jesus as "Rabbi" is in the gospel of John, which dates to the late 1st century or early 2nd century).  The article mentions a 2nd century controversy about Jesus having a wife, to settle the question of whether Christians should marry (Some of Paul's letters, almost two centuries earlier, reflect similar concerns.  The more things change....)

This fragment, then, has about as much historical veracity as the Infancy Gospel of Thomas, where Jesus the young child kills the children who irritate him.  The NYT, of course, plays this as if it were something found in the world of The DaVinci Code:


Even with many questions unsettled, the discovery could reignite the debate over whether Jesus was married, whether Mary Magdalene was his wife and whether he had a female disciple. These debates date to the early centuries of Christianity, scholars say. But they are relevant today, when global Christianity is roiling over the place of women in ministry and the boundaries of marriage.

The discussion is particularly animated in the Roman Catholic Church, where despite calls for change, the Vatican has reiterated the teaching that the priesthood cannot be opened to women and married men because of the model set by Jesus.

Yeah, I don't see much happening on that front because of this fragment of papyrus. It is interesting, though.