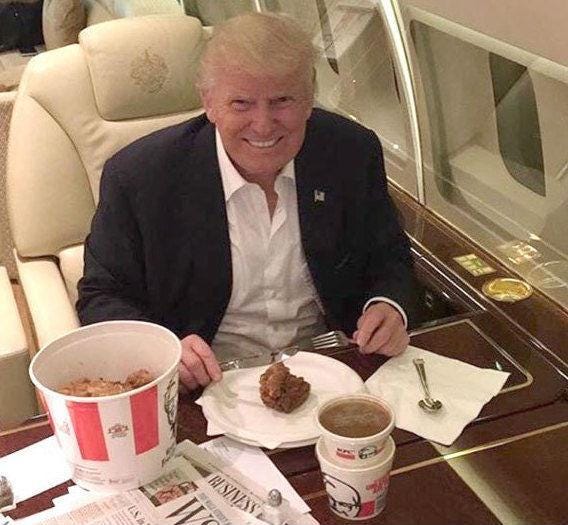 Molly Ivins used to say she loved having lunch with the Texas oil men at the Petroleum Club (I think her reference point was the one in Midland, but there was one in the town where I grew up, too), but she didn't want those guys running the country.

Can you tell which one is the guy you might like to have a beer with, and which one shouldn't be running the country?

“No chance,” scoffs Mike Sawchuk, 72, wearing an Eagles jacket and baseball cap, excitedly heading into the night with six Stormy autographs, purchased at $10 a pop, scrawled on baseballs.

He doesn’t think for a second that the busty blonde poses a serious threat to Trump, pointing out that sex scandals also dogged the presidencies of John F. Kennedy and Bill Clinton.

“I love Trump, I hope he straightens out this country. The other presidents really screwed us bad… Look at Korea, he almost has that straightened out!”

Neither was he the only detractor among the 50 or so clients who came to watch Stormy on a Monday night in Philadelphia. In ultra-polarized America, there are plenty of detractors about a scandal that has dominated headlines for months.

Howard, who refuses to give his last name, believes Trump has the upper hand. “He is bigger than that… and she is just a stripper.”

“He’s going big, with what he believes, and confident in it all,” a White House official told the website. “POTUS ran against experts — the ‘eggheads’ — and believes that rebalancing our policies on trade, defense spending, security, etc., simply makes sense.”

Trump was annoyed when Tillerson argued in favor of staying in the deal, an administration source said.

“He felt like Rex was always making excuses to stay in,” that source said.

Trump felt contempt for the officials and experts who negotiated the Iran deal, and the White House official explained the president’s motives for risking a potential Middle East crisis and setting in motion a chain of long-term consequences.

“(Trump) likes it when ‘experts’ are on CNN freaking out,” the White House official explained.


There is a point where egalitarianism has to give way to competence.