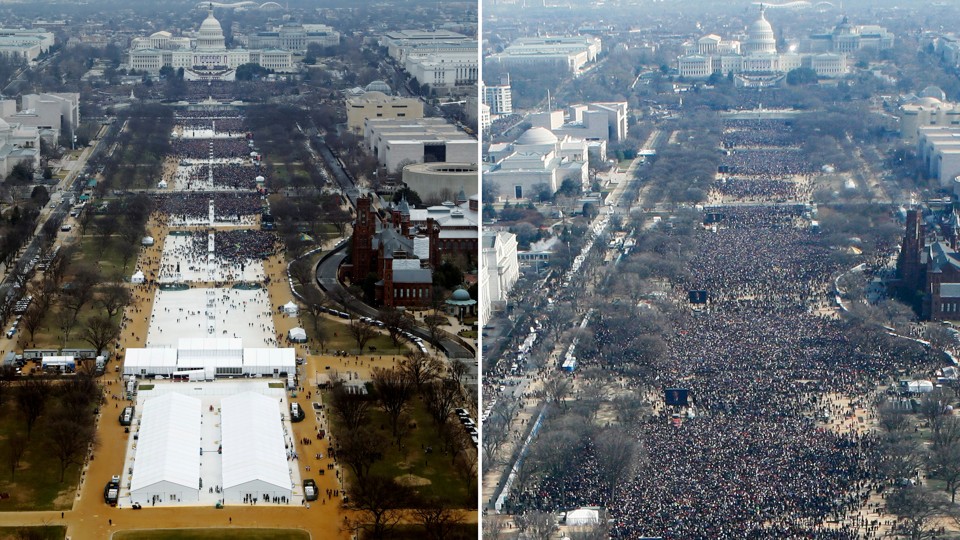 Because this really never gets old...

Ben Rhodes was on Fresh Air this morning, and I noted in passing (busy with other things) his account of Trump's meeting with Obama on the day of the inauguration.  Rhodes said Obama invited several people, including Rhodes, into the Oval Office after Trump had left.  Obama recounted trying to explain policy issues and other matters to the incoming President, but all Trump wanted to talk about was crowd size.  Trump praised Obama for the crowds he could draw, took credit for the crowds Trump said he could draw, and denigrated Hillary Clinton for not being able to draw large crowds.  Interesting, in the light of today's news:

Last week, the Eagles submitted 81 names of players who were planning to visit the White House, press secretary Sarah Huckabee Sanders said in a statement. The team was "full steam ahead," another administration official said, for an event that had been in the works since February.

But on Monday, the White House was informed that the delegation had been reduced to just two or three players, the owner, and the team's beloved mascot, Swoop.

"We feel like they wanted to publicly humiliate the White House and the president," the official said.


Or they just didn't want to associate with him.  Gee, why would that be?  Notice, of course, the White House didn't want to attribute this to "scheduling conflicts" or some other face saving reason; so they attack the players:

“Unfortunately, the Eagles offered to send only a tiny handful of representatives, while making clear that the great majority of players would not attend the event, despite planning to be in D.C. today,” White House press secretary Sarah Huckabee Sanders said in a statement. “In other words, the vast majority of the Eagles team decided to abandon their fans.”

Interestingly, according to Politico the whole point of the invitation was to shore up Trump's political base:

The change of plans was a setback for a White House that has until now viewed its culture war with the National Football League as a winning issue with its base. The event had been in the works for months, and taken up hours of planning by senior administration officials.


Because, you know, he draws large crowds.

Not surprisingly, Trump cancelled the whole thing in a fit of pique, blaming the anthem controversy he stirred up for the non-attendance of the players, and leaving his staff to figure out what just happened:

The last-minute cancellation took many White House staffers by surprise. Some people working in the communications shop said they were alerted to the change of plans just minutes before the presidential statement was blasted out by the press office.

A decision that, of course, had ramifications Trump neither considered nor really cares about:

On Tuesday morning, the NFL Players Association said in a statement posted to Twitter: "Our union is disappointed in the decision by the White House to disinvite players from the Philadelphia Eagles from being recognized and celebrated by all Americans for their accomplishment. This decision by the White House has led to the cancellation of several player-led community service events for young people in the Washington, D.C. area. NFL players love their country, support our troops, give back to their communities and strive to make America a better place."

Trump is the President of the people who come to his rallies and give him a sense of really big crowds (last week he attacked the NYT report on attendance at his rally with about as much credibility as his claims about his inaugural audience).   Everything is an excuse to declare some group "unmutual!"  Which, frankly, is far more disturbing than quasi-legal arguments about the President's pardon power and legal authority over the administration of justice.