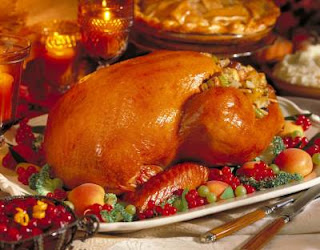 Let me let you in on a little secret:

After years of being constantly annoyed and often angry about the historical denial built into Thanksgiving Day, I published an essay in November 2005 suggesting we replace the feasting with fasting and create a National Day of Atonement to acknowledge the genocide of indigenous people that is central to the creation of the United States.

....
The most common argument went something like this: OK, it’s true that the Thanksgiving Day mythology is rooted in a fraudulent story — about the European invaders coming in peace to the “New World,” eager to cooperate with indigenous people — which conveniently ignores the reality of European barbarism in the conquest of the continent. But we can reject the culture’s self-congratulatory attempts to rewrite history, I have been told, and come together on Thanksgiving to celebrate the love and connections among family and friends.

The argument that we can ignore the collective cultural definition of Thanksgiving and create our own meaning in private has always struck me as odd.


The world doesn't revolve around you; and nobody cares.  You don't elevate yourself by being national scold demanding we all don sackcloth and ashes because you want to. Ironically, when I posted this quote it included a "Happy Holidays" message from Raw Story.  It made me think of the nuts on FoxNews decrying "Happy Holidays" instead of "Merry Xmas!", a stupidity that found its way to our head of state, who thinks it's still a winning complaint.  By now I'd have thought at least by negative example that we'd have gotten over foisting our particular animosities on the world at large and demanding it do as we say!  Don't we have enough of that from our POTUS?  Do we really need it from private citizens, too?

And by the way, you didn't "publish" anything, you posted your whinging on a website.  And FoxNews didn't even notice. Stop giving yourself airs, and the rest of us a reason to think less of you.  I, for one, don't think of Thanksgiving as being rooted in the Pilgrims (who were hardly the first settlers) or the kindness of the natives.  I think of it as a day for family and feasting and football, the three "F's" of American culture.  I'll try not to think of tedious people like you who think the world is out of line for not doing as you wish.

Get over yourself.  The world is not here to please you, and there are larger injustices to be addressed than some silly idea of a "National Day of Atonement."  This is America; it would just be an occasion for shopping and sales, anyway.

ADDING:  in response to the comment:  the whole idea does run into Niebuhr's issue, that you can't make a nation take a moral stance because morality often requires sacrifice, and the point of a nation is to provide security, not demand sacrifice for something that doesn't contribute to the nation's security (which is the security of the citizens of that nation).  Atonement would require sacrifice of people who may believe they have nothing to atone for.  Can you force a moral stance on people, one that requires them to give something, anything, up in return?  You may ask it of them; you can't require it of them, any more than we allow a parent to withhold medical care from a child for moral reasons.  So you may complain that America should be Moral Like You, but it's a pretty selfish complaint.  Demanding it of America, is just childish.