Yesterday All the Past 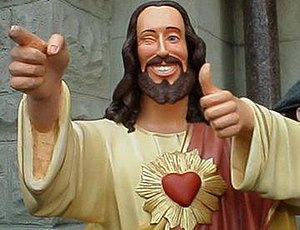 Thomas More opposed Henry VIII because Thomas More preferred his version of God to Henry's.  Hard not to be sympathetic to More these days, but that doesn't mean More was right; or that arguments over whose God is in charge are any less relevant today than they were in the 16th century.  Listen:

“We believe in things like, what did you do to the least of them?” Dawkins-Haigler explained. “You fed the hungry, you clothed the naked, you went to see those who are in prison.”

“You do not have to be a socialist to be a Christian!” Jeffress shot back. “Socialism is antithetical to Christianity and if they nominate Bernie Sanders, they are not going to be able to attract any faith voters.”

“I totally disagree,” Dawkins-Haigler retorted. “People would have said that Jesus was more of a socialist than anybody we’re talking about today.”
The remarks stopped Fox News host Pete Hegseth cold.

“Why was Jesus a socialist?” he exclaimed.

“Because Jesus did not sit with the establishment, he overturned tables of the tax collectors, he sat with people who were lepers,” Dawkins-Haigler explained. “He made sure he healed people who people thought should not have been healed.”

“So we have to be very careful how we use this language and try to take ownership of who God is,” she added.


I'm pretty sure Hegseth was saying this is " a big claim":

“Because Jesus did not sit with the establishment, he overturned tables of the tax collectors, he sat with people who were lepers,” Dawkins-Haigler explained. “He made sure he healed people who people thought should not have been healed.”


Except that it's perfectly in keeping with the picture of Jesus presented in the synoptic gospels.  In context, Hegseth seems to be saying "We have to be very careful how we use this language and try to take ownership of who God is" is "a big claim."  But that's the same claim that consumed Henry VIII and Thomas More.  They fought over the ownership of who God is.  And Robert Jeffress ignores that challenge and lays claim to God as a God entirely in Jeffress' image:


I could say Jeffress couldn't define "socialist" if you gave him a dictionary and a head start.  Then again, neither can Bernie (who often argues for Danish socialism as a model for America; but Denmark's government denies it is socialist, but is rather capitalist with extensive social programs.  How many angels can dance on the head of this pin?).  But that "Render to Caesar" citation is not the Pauline instruction to follow the rule of government (especially when government will lop your head off at a moment's notice, a practice only belatedly abandoned for the rule of law, the latter which is a very Hebraic concept of society and social order); rather, it is a response to a trap about what the coin said:  "divi filius," or Caesar is son of god.  There is also the question of idolatry:

A coin of Julius Caesar shows his spirit descending cometlike to takes it place among the eternal deities. A coin of Augustus Caesar calls him divi filius, son of a divine one, son of a god, son of the aforesaid comet. A coin of Tiberius Caesar hails him as pontifex maximuis, supreme bridge builder between earth and heaven, high priest of an imperial people. A silver denarius was a day's pay for a laborer and, if a day laborer meant somebody who worked every day rather than somebody who looked for work every day, it would have been a very good salary. Imagine this situation: If, after three days of hard work, a day laborer held those silver denarii in his hand, how would he, could he, should he distinguish between politics and religion in the Roman Empire?....Rome, and Rome alone, had built a kingdom and only it could approve how to build an underkingdom, a minirealm, a subordinate rule.

Capitalism is not in the least concerned with distinguishing between what is Caesar's and what is God's.  Church is to be compassionate, but that compassion is not limited to individual actions.  There is a sound historical argument to be made that Christianity, for all it's failings and alliances with evil men in power, has been the ameliorating source of much of the "progress" in Western society, the reason for what compassion and attention to the individual (there's a telling scene in "The Tudors" where Henry lays siege to the city of Boulogne, France.  As the siege drags on the soldiers starve, while in the royal tent Henry and his Dukes live as well as they would at one of the palaces.  That was not only expected it was practically required.  Why have a king if he's just like the commoners?).  Jeffress casts that aside in preference for personal piety (and who is to say what is in another person's heart?  Who can compel compassion?), but he doesn't defend Christianity.  Except in so far as he defends it against "communism [lite]," which I learned in high school is the wrong understanding of socialism.

But then we're back to that, aren't we?

It's notable Jeffress doesn't provide an alternative view of Christianity; he just upholds it as the defender of the status quo, of late modern American capitalism, where, as Bernie Sanders pointed out (he's not wrong on policy, just on how to implement it) Mike Bloomberg owns more wealth than the bottom 125 million Americans combined.  Not a percentage, an actual count of persons.  I don't know how Robert Jeffress squares that with the basiliea tou theou, where the first are last and the last first, and the first of all is last and servant of all (who does Michael Bloomberg serve?), but from this account, he'd never even try.

Compassion is for individuals; the kingdom of God is in the bye-and-bye, and this is the best of all possible worlds for him because Trump's in the White House, and all is right with the realm.  Which ain't even close to being Christian, in my book.