We're not even a half-hour in and the #DemDebate is totally out of control. Moderators getting trampled. pic.twitter.com/HoEdJUE1H7
— Aaron Rupar (@atrupar) February 26, 2020

I'm glad I was eating dinner, away from the TeeVee.

This debate is a 6 on 1 attack on Bernie Sanders.

There’s a decent chance Bernie will yell “I’ll see you in hell!”; throw down a smoke grenade and disappear into a cloud of vapor.
— The Hoarse Whisperer (@HoarseWisperer) February 26, 2020

On the other hand, I’m almost sorry I missed it.

I feel like I've spent lifetimes watching these candidates recite the same talking points about health care over and over and over
— Aaron Rupar (@atrupar) February 26, 2020


Oh, hell, who doesn't?  What is this, the 90th debate since this time last year?  I ask again:  who is watching this stuff anymore, except pundits and political Twitter?  When do they do the debate for Super Tuesday (which is a week away)?  And who will care (early voting started in Texas a week ago)?


But there was some good commentary to be had:

How I permanently think of him now. I can’t help it.  Also the reason I think of Bernie as an old man returning soup in a deli, a line from "Seinfeld."  Or maybe it's because of this:

Sanders gets indignant at boos of his comments on Cuba. “Really?? Really??"
— Kimberly Atkins (@KimberlyEAtkins) February 26, 2020


But this is not the nostalgia I wanted to feel last night:

The Bernie who thought George McGovern was too moderate so he had to support Dr. Spock is coming out tonight.
— John Weaver (@jwgop) February 26, 2020

Sitting on a sofa on a Tuesday evening now
Going to the candidates' debate
Laugh about it, shout about it
When you've got to choose
Every way you look at this you lose
— Virginia Heffernan (@page88) February 26, 2020

I'm a Boomer. Am I not going to repeat a reference to my favorite Simon & Garfunkel album?

NEW: President Trump is privately furious about the slide of the stock market due to coronavirus. He is expected to meet with aides tomorrow to discuss. WH is struggling to contain the economic panic over the virus' spread -- w/ @jdawsey1 https://t.co/6uWqLKE6N2
— Jeffrey S. Stein (@JStein_WaPo) February 25, 2020


Which allows us to segue to Trump, something I want to do anyway, because  it's Ash Wednesday and I don't want to clutter the place with posts.  But please note Trump is angry that sickness in America may affect his re-election, and angry the stock market (which is not a leading economic indicator) doesn't have his back (even though it's 8 months to the elections, and what happens today on Wall Street may not mean anything at Hallowe'en.) He lives in an eternal Now of blind panic. Which makes this appropriate: 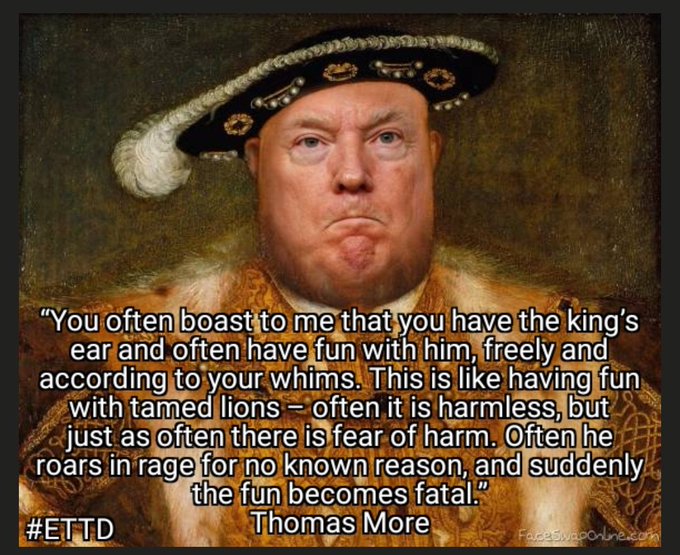 So that's a thing, now. And thinking of this:

Made me think of this (even though the movie is about as historical an account as "Inherit the Wind"):

“William Roper: “So, now you give the Devil the benefit of law!”

Sir Thomas More: “Yes! What would you do? Cut a great road through the law to get after the Devil?”

William Roper: “Yes, I'd cut down every law in England to do that!”

Sir Thomas More: “Oh? And when the last law was down, and the Devil turned 'round on you, where would you hide, Roper, the laws all being flat? This country is planted thick with laws, from coast to coast, Man's laws, not God's! And if you cut them down, and you're just the man to do it, do you really think you could stand upright in the winds that would blow then? Yes, I'd give the Devil benefit of law, for my own safety's sake!”

Yeah, that's where we are.  And still the Democrats are fighting over who Mom loves best.

Klobuchar warned against what could happen if the candidates continue to fight one another #DemDebate pic.twitter.com/ViX7fXeZ4p
— The Daily Beast (@thedailybeast) February 26, 2020