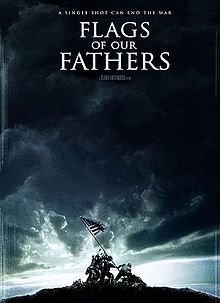 I missed this "controversy" over the weekend, which is odd because I usually watch Chris Hayes (but I slept late that morning).

I find it ironically funny that Mr. Hayes' innocuous remarks sparked such outrage, considering that AMC (the cable channel, not the defunct car company) ran "Flags of Our Fathers" over and over again all weekend, a movie dedicated to examining the idea of "war heroes" and even the wisdom of making the iconic flag raising on Iwo Jima iconic at all.

According to the film, the Marines and Navy corpsman responsible for that image were made into heroes in order to generate funding for the war effort.  They didn't think they were heroes.  They pointedly called the dead on Iwo Jima the real heroes, and never seem to have been comfortable with their roles (if the movie is accurate, one of them was even promised all kinds of jobs, but after the war he was "last week's hero," and never worked any job better than janitor for the rest of his life.  One of the others, a Native American, died of "exposure."  To say the way America treats its "heroes" does not come across well in this film would be an understatement.)  They were told, in blunt terms, that they would be heroes in public because without them, the war bond drive would collapse, and with it would go the ability of the U.S. to continue to wage war.  (Which, not incidentally, puts a new light on the bombing of Hiroshima and Nagasaki.  Two atomic bombs that caused Japan to sue for peace were cheaper, and not just in American lives.)  The film is a nuanced and careful examination of what we mean by "heroes" (shot through with war scenes that make "Saving Private Ryan" look like a Sunday school picnic.)

But that isn't controversial, while Mr. Hayes' remarks are.