Men With No Reasons 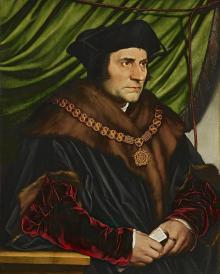 Once again I'm caught relying on Charles Pierce for my material (although he commits some howlers in his discussion of this latest move by the "clan of the red beanie", to wit:  "The Civil Rights Movement was an exercise of political pressure that used for its philosophical underpinnings certain religious themes and rhetoric. (And 'the light of the Gospels'? Well, partly, but, in his strategy of nonviolent resistance, which was the actual work of the movement, King was a student of Gandhi, who liked Christ, but didn't trust Christians.)"  Um...it was the Rev. Dr. Martin Luther King, Jr.   Re-read that Birmingham letter, Mr. Pierce; it's by a Christian pastor directed to Christian pastors (the "My Dear Fellow Clergymen" should be your first clue), and nowhere in it does the Rev. Dr. mention Ghandi.  I did hear John Lewis on Diane Rehm this morning mention how the movement studied (he emphasized "studied") the ideas of Gandhi, as well as Thoreau, as well as the Gospels.  To toss Christianity out of a movement that was largely based in black CHRISTIAN churches on the thin thread of lessons learned from Mahatma Gandhi and what he thought of Christianity, is, well, really, just pathetic.  But I digress....)

Anyway, this is what the Bishops in the U.S. are up to:

“Some unjust laws impose such injustices on individuals and organizations that disobeying the laws may be justified,” the bishops state in a document developed to be inserted into church bulletins in Catholic parishes around the country in June.

“Every effort must be made to repeal them,” the bishops say in the document, which is already posted on the website of the U.S. Conference of Catholic Bishops. “When fundamental human goods, such as the right of conscience, are at stake, we may need to witness to the truth by resisting the law and incurring its penalties.”

Now seriously:  is publishing a flyer to be distributed into churches around the country likely to get police dogs and water cannons turned on you in the streets?  Is any Bishop likely to go to jail because they don't want to provide insurance to Pierce's Presbyterian charwoman so she can get birth control pills?  Is anybody's liberty threatened by this rule from the Obama Administration?

We have a theological term for this.  We call it "Bullgeshichte."

As the article notes:

The bulletin insert the bishops have prepared to distribute in parishes around the country in June specifically references the late Rev. Martin Luther King, Jr., who was imprisoned in Birmingham, Ala., on Good Friday 1963 for marching without a permit to protest the racist segregation laws enforced in Alabama in that period.

So yes, it just gets worse.

“In his famous ‘Letter from Birmingham Jail’ in 1963,” the bishops says, “Rev. Martin Luther King Jr. boldly said, ‘The goal of America is freedom.’ As a Christian pastor, he argued that to call America to the full measure of that freedom was the specific contribution Christians are obliged to make. He rooted his legal and constitutional arguments about justice in the long Christian tradition: ‘I would agree with Saint Augustine that ‘An unjust law is no law at all.’… A just law is a man-made code that squares with the moral law or the law of God. An unjust law is a code that is out of harmony with the moral law.’”

Excuse me while I throw up in my mouth a little.   Can there seriously be a comparison between the laws Dr. King opposed, and this ruling on insurance coverage?  Well, let's see.  Here's what President Obama said about it:

"We don’t need another political fight about ending a woman’s right to choose, or getting rid of Planned Parenthood or taking away affordable birth control," Obama said. "We don’t need that. I want women to control their own health choices, just like I want my daughters to have the same economic opportunities as my sons. We’re not turning back the clock. We're not going back there."

And this is the paragraph that precedes Dr. King's analysis of just and unjust laws the Bishops are referring to:

We have waited for more than 340 years for our constitutional and God given rights. The nations of Asia and Africa are moving with jetlike speed toward gaining political independence, but we still creep at horse and buggy pace toward gaining a cup of coffee at a lunch counter. Perhaps it is easy for those who have never felt the stinging darts of segregation to say, "Wait." But when you have seen vicious mobs lynch your mothers and fathers at will and drown your sisters and brothers at whim; when you have seen hate filled policemen curse, kick and even kill your black brothers and sisters; when you see the vast majority of your twenty million Negro brothers smothering in an airtight cage of poverty in the midst of an affluent society; when you suddenly find your tongue twisted and your speech stammering as you seek to explain to your six year old daughter why she can't go to the public amusement park that has just been advertised on television, and see tears welling up in her eyes when she is told that Funtown is closed to colored children, and see ominous clouds of inferiority beginning to form in her little mental sky, and see her beginning to distort her personality by developing an unconscious bitterness toward white people; when you have to concoct an answer for a five year old son who is asking: "Daddy, why do white people treat colored people so mean?"; when you take a cross county drive and find it necessary to sleep night after night in the uncomfortable corners of your automobile because no motel will accept you; when you are humiliated day in and day out by nagging signs reading "white" and "colored"; when your first name becomes "nigger," your middle name becomes "boy" (however old you are) and your last name becomes "John," and your wife and mother are never given the respected title "Mrs."; when you are harried by day and haunted by night by the fact that you are a Negro, living constantly at tiptoe stance, never quite knowing what to expect next, and are plagued with inner fears and outer resentments; when you are forever fighting a degenerating sense of "nobodiness"--then you will understand why we find it difficult to wait. There comes a time when the cup of endurance runs over, and men are no longer willing to be plunged into the abyss of despair. I hope, sirs, you can understand our legitimate and unavoidable impatience. You express a great deal of anxiety over our willingness to break laws. This is certainly a legitimate concern. Since we so diligently urge people to obey the Supreme Court's decision of 1954 outlawing segregation in the public schools, at first glance it may seem rather paradoxical for us consciously to break laws. One may well ask: "How can you advocate breaking some laws and obeying others?" The answer lies in the fact that there are two types of laws: just and unjust. I would be the first to advocate obeying just laws. One has not only a legal but a moral responsibility to obey just laws. Conversely, one has a moral responsibility to disobey unjust laws. I would agree with St. Augustine that "an unjust law is no law at all."

You can see the Bishops are suffering just like Dr. King and his ancestors did for 340 years.  Why, you can't slip a piece of paper between the difference between them; it's that close. Requiring all employers to provide the same health care coverage to all of their employees is just like suffering from lynch mobs and segregated amusement parks and people calling you "nigger."

“It is a sobering thing to contemplate our government enacting an unjust law,” the bishops said. “An unjust law cannot be obeyed. In the face of an unjust law, an accommodation is not to be sought, especially by resorting to equivocal words and deceptive practices. If we face today the prospect of unjust laws, then Catholics in America, in solidarity with our fellow citizens, must have the courage not to obey them. No American desires this. No Catholic welcomes it. But if it should fall upon us, we must discharge it as a duty of citizenship and an obligation of faith.”

And I'm sure the penalty will be a very serious fine.  A very serious fine.  Maybe as they write the check for it, the Bishops will find time to scratch out a letter on hidden bits of paper and sneak it out of their bishoprics to be published in defiance of the overwhelming burden of governmental regulations.  And please note, this is the slippery slope to closing Catholic churches altogether:

What we ask is nothing more than the right to follow our consciences as we live out our teaching. This right is not only about our ability to go to Mass on Sunday or pray the Rosary at home.

Today, it's insurance coverage for non-Catholic employees of non-religious (i.e., non-ecclesiastical) institutions; tomorrow, they'll come for your rosary rings.  Because:

What is at stake is whether America will continue to have a free, creative, and robust civil society—or whether the state alone will determine who gets to contribute to the common good, and how they get to do it.

And the common good is not benefited by treating all non-religious employees as equally as possible.

I wanted to end with some clever, sharp comment; but honestly, I think the Bishops have simply lost their minds.

It must be something in the water.