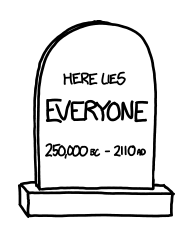 So apparently there was a long and detailed discussion of death (it seems the proposition for the debate was "Death is not final"), and nobody asked the obvious question:  "What is death?"

The subject raises, in part, a linguistic question:  in English we never say someone is "death" unless we mean a fictional personification of the reality of mortality (I have to be careful here not to use "death" to define "death").  We can say someone is dead; but not that they are death.  It wouldn't mean the same thing.

So, the dichotomy:  someone is alive, someone is dead.  The change in state from one to the other is death; or, more precisely, the moment of death.  But once that moment is gone, death is no more, and you are simply dead.

So what is death?  The moment of the cessation of life.  And why does that happen?  Why does that transition occur?  At best, all we can say is the organism is no longer capable of sustaining life.  Why?  Well, at bottom, that's all we can say.  Causes, of course, vary; from trauma to "old age" (rapidly disappearing as the diagnosis of choice for the deceased), but the same fundamental applies:  the organism becomes incapable of sustaining life.

Why?  What is life?  Where does it come from?

In the early 20th century, seeking to replace "soul" that comes from God and animates the body, the concept was "élan vital."  Virginia Woolf wrote a fascinating essay on the topic while observing "The Death of the Moth."  Interestingly, she had to write about death in order to write about life.  We often run up against these boundaries.  We seem to best know a thing by running it up against its limits; by observing it against what it is not.  And dead is not alive.

We seem to be going in circles here.

Alive is animate; dead is inanimate.  And still there is the moment, the instant, of death.  That is the linchpin of the discussion, the action of decoupling where "alive" becomes "dead," and the question is:  does the moment of death mark a finality, or merely a transition from animate flesh to permanent existence?

One objection that is not an objection was raised in the debate:


You are expecting people to report experiences in terms they don't have; in images they've never seen?  You were expecting a highly subjective experience to be completely objective, a neutral observation of an absolute thing?  The fact that Christians in NDE's have claimed to meet Jesus is neither proof they actually did, nor proof that they had no experience beyond firing synapses.  It is proof they had an experience.

What kind of experience, is the question.  The fact that it is one they report in culturally related terms is not determinative of the validity of the experience.  But then, denying reports of NDE's is also to understand these reports in cultural terms.

In the parable of Lazarus, Abraham tells the rich man that even if Lazarus were to return from the dead, the brothers of the rich man would not heed the teachings of the prophets and avoid the damned man's fate.  Likewise, if someone were to return from the dead, others would deny the reports of the resurrection, perhaps even deny the existence of the person claimed to have been resurrected, and if they were an eyewitness to the event, if they saw the dead walk, they would argue that the person was never dead.

There is always a way to look at these things that denies whatever claim is made for them.  The argument that "the evidence for such things must be 'amazingly good' " is a disingenuous one, since it starts from a principle of proof where it will never accept as "proof" any evidence with contradicts what is already accepted as true.  And this, of course, is the "objective" stance that considers only "facts."

"Facts" being a carefully defined terms whose definition is never subject to serious examination.

That observation doesn't validate extraordinary claims (who among us knows someone who has risen from the dead?), but it does challenge the easy assumption that only "extraordinary proof" can support "extraordinary claims."  Yes, it is true that to accept some claims it may seem you have "to dismiss the enormous successes of physics, chemistry, biology and neuroscience."  But what if you merely have to question the reach of those successes; or rather, question the interpretation of those successes?

Surely science can do that.  Because "extraordinary proof" is already, by definition, impossible.  If it is extra-ordinary, it will be explained in "ordinary" terms; at which point a near-death experience means you met Jesus, or even Santa Claus.  And that's so ordinary it can't be true; can it?

So what is "death"?  Cessation of life function, moment of?  If so, what does that mean?  What is life function, what, indeed, is consciousness?  This doesn't answer that question:

we don’t know exactly how the brain generates consciousness…not knowing the mechanism is not the same thing as saying it’s not possible…we’re certainly not all the way there in understanding exactly what it is…it’s not a black and white thing.

John Donne didn't think it involved a bright light and a meeting with Santa Claus:  "One short sleep past, we wake eternally," he wrote in his most famous Holy Sonnet.  For Donne, the resurrection came at a point in time, not at a point in an individual life.  Then again, when you are dealing in terms of eternity (which Donne certainly was, and which any discussion of life after death certainly presumes; because the very concept of immortality is that life is permanent, not death; that life, like eternity, is without end) it could be that "short sleep" is subjectively short indeed.  If you sleep without dreams, it can be as if there was no time between the last waking moment and the next.

Or perhaps it is just a matter of enculturation.  People suffering severe trauma have been known to recite the Pater Noster without conscious volition.  That is surely a matter of enculturation.  But does that mean the words are irrelevant, are merely phonemes?  It doesn't mean the words have metaphysical power; but it doesn't seem they are wholly irrelevant, either.

No more than the words we choose to discuss whether or not death is final.  But the word itself:  "Death."

What does that mean?  If "death" means "cessation of life functions observable in an organism," then yes, death is final.  We've yet to see a dead organism regain life activities (be animate again).  But that cannot be the meaning of the word in the statement "Death is not final," unless by that formulation you also mean "A square is circular."  It doesn't get any better if you say "Death is the cessation of existence," because now you have to explain what you mean by "existence".

Because if you are going to say that extraordinary evidence is necessary to prove there is an existence after the cessation of life functions in an organism, you are first going to have to define what you mean by "existence."  And before that, I suspect you'll have to explain what you mean by "consciousness."  Explaining that it is what is "generated" by the brain is no explanation at all.

All of which is not to say the claims of Platonism and Christianity are established by these gaps in scientific terminology; but rather, that the participants in this debate were speaking in two different language games, and so talking past each other.  And the only way to establish the superiority of one language game over the other, ultimately, is to say the one you accept is right because you accept it.  While the proponents of immortality or just the persistence of existence have many claims to substantiate, the "science" side has many claims to establish, too:  including solid definitions of "existence" and "consciousness."

And maybe even a better definition of "death."

If we're going to play these language games, we all need to agree on what the ground rules are.