"Stephens 'was just not a conductor' of electricity...." 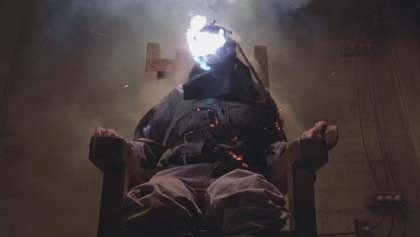 Not an actual execution.

We are all now agreed that Oklahoma is the new home of barbarism, because a man died during an execution, but not in the way planned for by the state.

"The body turns bright red as its temperature rises," and the prisoner's "flesh swells and his skin stretches to the point of breaking." Sometimes the prisoner catches on fire, particularly "if [he] perspires excessively."  Witnesses hear a loud and sustained sound " like bacon frying," and "the sickly sweet smell of burning flesh" permeates the chamber. This "smell of frying human flesh in the immediate neighbourhood of the chair is sometimes bad enough to nauseate even the Press representatives who are present."  In the meantime, the prisoner almost literally boils: "the temperature in the brain itself approaches the boiling point of water," and when the postelectrocution autopsy is performed "the liver is so hot that doctors have said that it cannot be touched by the human hand."  The body frequently is badly burned and disfigured.

The violence of killing prisoners through electrical current is frequently explained away by the assumption that death in these circumstances is instantaneous and painless. This assumption, however, in fact "is open to serious question" and is "a matter of sharp conflict of expert opinion." 27 Throughout the 20th century a number of distinguished electrical scientists and medical doctors have argued that the available evidence strongly suggests that electrocution causes unspeakable pain and suffering. Because " '[t]he current flows along a restricted path into the body, and destroys all the tissue confronted in this path . . . [i]n the meantime the vital organs may be preserved; and pain, too great for us to imagine, is induced. . . . For the sufferer, time stands still; and this excruciating torture seems to last for an eternity.' "  L.G.V. Rota, a renowned French electrical scientist, concluded after extensive research that


"[i]n every case of electrocution, . . . death inevitably supervenes but it may be very long, and above all, excruciatingly painful . . . . [T]he space of time before death supervenes varies according to the subject. Some have a greater physiological resistance than others. I do not believe that anyone killed by electrocution dies instantly, no matter how weak the subject may be. In certain cases death will not have come about even though the point of contact of the electrode with the body shows distinct burns. Thus, in particular cases, the condemned person may be alive and even conscious for several minutes without it being possible for a doctor to say whether the victim is dead or not. . . . This method of execution is a form of torture."
Although it is an open question whether and to what extent an individual feels pain upon electrocution, there can be no serious dispute that in numerous cases death is far from instantaneous. Whether because of shoddy technology and poorly trained personnel, or because of the inherent differences in the "physiological resistance" of condemned prisoners to electrical current, see n. 29, supra, it is an inescapable fact that the 95-year history of electrocution in this country has been characterized by repeated failures swiftly to execute and the resulting need to send recurrent charges into condemned prisoners to ensure their deaths. The very first electrocution required multiple attempts before death resulted,31 and our cultural lore is filled with examples of at- tempted electrocutions that had to be restaged when it was discovered that the condemned "tenaciously clung to life." 32 Attending physicians routinely acknowledge that electrocutions must often be repeated in order to ensure death. It is difficult to imagine how such procedures constitute anything less than "death by installments"-"a form of torture [that] would rival that of burning at the stake." Louisiana ex rel. Francis v. Resweber,

....
"At 8:30 p.m. the first jolt of 1900 volts of electricity passed through Mr. Evans' body. It lasted thirty seconds. Sparks and flames erupted from the electrode tied to Mr. Evans' left leg. His body slammed against the straps holding him in the electric chair and his fist clenched permanently. The electrode apparently burst from the strap holding it in place. A large puff of greyish smoke and sparks poured out from under the hood that covered Mr. Evans' face. An overpowering stench of burnt flesh and clothing began pervading the witness room. Two doctors examined Mr. Evans and declared that he was not dead.


"The electrode on the left leg was refastened. At 8:30 p.m. [ sic ] Mr. Evans was administered a second thirty second jolt of electricity. The stench of burning flesh was nauseating. More smoke emanated from his leg and head. Again, the doctors examined Mr. Evans. The doctors reported that his heart was still beating, and that he was still alive.


"At that time, I asked the prison commissioner, who was communicating on an open telephone line to Governor George Wallace to grant clemency on the grounds that Mr. Evans was being subjected to cruel and unusual punishment. The request for clemency was denied.


"At 8:40 p.m., a third charge of electricity, thirty seconds in duration, was passed through Mr. Evans' body. At 8:44, the doctors pronounced him dead. The execution of John Evans took fourteen minutes."

Similarly, this was the scene at Georgia's electrocution of Alpha Otis Stephens just last December 12th:


"The first charge of electricity administered today to Alpha Otis Stephens in Georgia's electric chair failed to kill him, and he struggled to breathe for eight minutes before a second charge carried out his death sentence for murdering a man who interrupted a burglary.

". . . A few seconds after a mask was placed over his head, the first charge was applied, causing his body to snap forward and his fists to clench.


"His body slumped when the current stopped two minutes later, but shortly afterward witnesses saw him struggle to breathe. In the six minutes allowed for the body to cool before doctors could examine it, Mr. Stephens took about 23 breaths.


Stephens " 'was just not a conductor' of electricity, a Georgia prison official said."

Thus there is considerable evidence suggesting-at the very least-that death by electrocution causes far more than the "mere extinguishment of life."  This evidence, if correct, would raise a substantial question whether electrocution violates the Eighth Amendment in several respects. First, electrocution appears to inflict "unnecessary and wanton . . . pain" and cruelty, and to cause "torture or a lingering death" in at least a significant number of cases.   Second, the physical violence and mutilation that accompany this method of execution would seem to violate the basic " dignity of man."  Finally, even if electrocution does not invariably produce pain and indignities, the apparent century-long pattern of " abortive attempts" and lingering deaths suggests that this method of execution carries an unconstitutionally high risk of causing such atrocities.  These features of electrocution seem so "inherent in [this] method of punishment" as to render it per se cruel and unusual and therefore forbidden by the Eighth Amendment.


That's from Glass v. Louisiana,  a Supreme Court case from 1985.  I assume this is why executions are no longer public, and why the officials drew the curtain on the execution room in Oklahoma.  Some things should not be witnessed.

Whether they should be conducted is another matter.

The problems with death by electrocution, which it turns out wasn't as quite and unassuming as the movies made us think it was, led to the use of lethal injections.  But electrocution wasn't the only flawed method of killing people:

During the 47 minutes of the execution, Gray “foamed at the mouth and [beat] his head violently against a metal pole just behind the chair.” Executioners drew the blind on the viewing chamber after a few minutes.

Seated before the squad, the volley of bullets only knocking him out of the chair while he screamed “Oh my God! My God! They have missed!” He bled to death 27 minutes later.

Asphyxiation. Death was not pronounced until 10 1/2 minutes after the cyanide tablets were dropped.During the execution, Harding thrashed and struggled violently against the restraining straps. A television journalist who witnessed the execution, Cameron Harper, said that Harding's spasms and jerks lasted 6 minutes and 37 seconds. "Obviously, this man was suffering. This was a violent death ... an ugly event. We put animals to death more humanely." Another witness, newspaper reporter Carla McClain, said, "Harding's death was extremely violent. He was in great pain. I heard him gasp and moan. I saw his body turn from red to purple." One reporter who witnessed the execution suffered from insomnia and assorted illnesses for several weeks; two others were "walking vegetables" for several days.


No wonder they draw the curtains.

There are 43 more stories at that link, all regarding executions since 1982.  There are plenty of examples, at both links, of problems with lethal injections.

It was the norm.

That is what is barbaric.