"What are we doing here?" 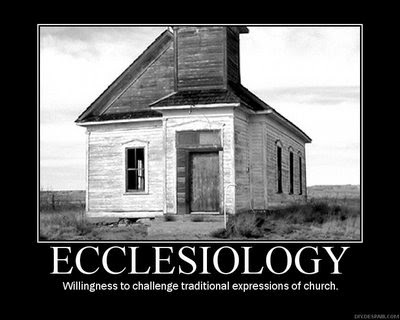 Compare this, about hashtag activism such as "#bringbackourgirls:

Defenders of campaigns like these often say that they can be gateways toward greater understanding of complex global issues. Viewers first get hooked on the moral outrage, then learn more about the underlying conditions that produced the crisis, becoming better-informed global citizens.

This paper suggests that unfortunately the opposite is true. Viewers get interested when they hear about evil monsters like the LRA or Boko Haram that just need to be stopped. When they learn more about the issue and find out that, lo and behold, the world is a very complicated place, that killing the monster won’t be so easy and that there are larger issues in play beyond the monster itself, they lose interest.

Willow Creek Community Church is another "mega church that has been much studied by students of ecclesiology. G.A. Pritchard, a Ph.D. candidate sympathetic to the aims of Willow Creek's theology, studied it's "seeker services," which were designed to draw in the "unchurched" and convert them to Christians. The process was supposed to be a four-step model that drew the unchurched into a full communion among the community of believers. (An explanation of the process is available in Bill Hybel's book, Rediscovering Church.) The only problem with it was, it didn't work.

Pritchard's study concluded that "unchurched" members of Willow Creek were certainly drawn to the "contemporary worship, which was an attractice TV variety show format, with up-tempo songs led by a "praise leader," backed by a rock band, and demanding little more than listening skills from the "congregation." The idea was this "seeker service" would be as familiar as possible (and so it was consciously modeled on a TV talk show, with the "preacher" as the "host"), and by constant exposure to a "moral" message embedded in an entertaining package, the unchurched would deepen their commitment to God by furthering their commitment to the church, and become active and engaged church members. Except few did; most, predictably, took the path of least resistance. They came for the cake and coffee, the candy, so to speak, and left. They never asked for more.


And tell me if I'm wrong in seeing a whole lot of similarity there.

The Church of Sacrifice for Meaning and Belonging is still the church nobody really wants to join.
Posted by Rmj at 2:40 PM