Pleased to meet you, hope you guess my exploration of other cultures 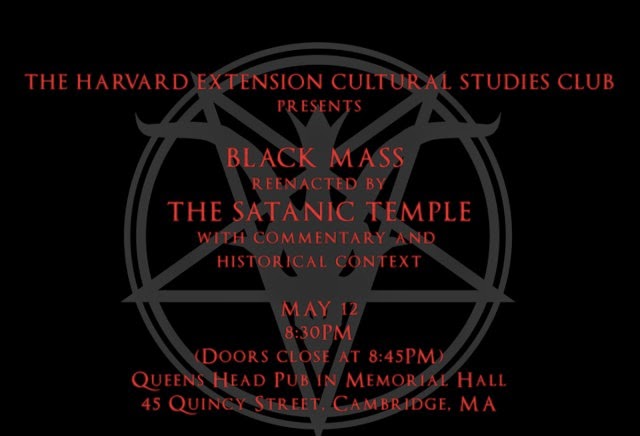 
No sympathy for the devil, indeed: Harvard and Boston-area Catholics are in an uproar over an independent student group's plans to hold a Satanist ceremony Monday evening as part of an ongoing series of events exploring other cultures.

The story prompted two different articles at Religion Dispatches; but the best response I've read so far was at Salon.  Where, oddly enough, one commenter told me that the Eucharist is just an anti-Seder ritual, so the level of discourse on this matter, like most things on the internet, would have to crawl up to get over my big toe.

But I can't see Harvard getting criticized for refusing to host either of those, even if they tried to put it in an educational context.

I understand the group that was to put on this "reenactment" saw it as a personal statement of intellectual independence:

“To us, the Black Mass is an amalgamation that developed through time based on witch-hunting fears and later adopted by some as a declaration of personal Independence against what they felt to be the stifling authority of the church,” Satanic Temple head Lucien Greaves told CNS news.


But this "developed through time" matter is a bit rich.  The basis for the "black Mass," according to Joseph Laycock, was a 19th century French novel.  I'm not sure how that makes the matter an "event exploring other cultures," unless that culture is 19th century French atheist novelists, and given the 2000 year history of the Roman church, I don't think 100 years is much of a development through time.

It's a tempest in a teapot, of course; but it's also rather telling that the controversy is being treated as one that shouldn't be.  I know there was serious concern about the reenactment using a consecrated Host, or even using bread at all.  But if the "minstrel show" was reenacted in everything but blackface, would that make it acceptable, too?

UPDATE:  Having said my piece, I find this perspective, which I think is a valid one and worthy of consideration.  My practical response might be that this was not the occasion for dialogue, even if it should have been; and that such dialogue is notoriously difficult to engage on the terms described in the essay.

On the other hand, my more practical response would be: if it was easy, it would have been done by now.  And if not now, when?