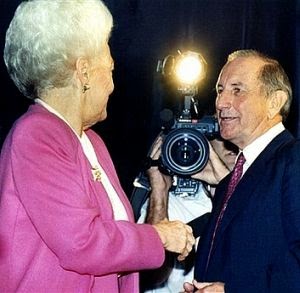 Look carefully; you'll see her hand is out, and his hand isn't.  On such matters do elections turn.

Yes, tout le monde is upset that Wendy Davis put a wheelchair in a campaign ad, because Greg Abbott (her political opponent) is in a wheelchair following an accident that Charlie Pierce tells me made Mr. Abbott a very rich man (it happens, though usually payments are for medical expenses and pain and suffering; perhaps punitive damages added to that high total Mr. Pierce records.  Anyway....).

That bothers me not a bean.  Texas politics is routinely ignored unless there is a reason to pay attention to it, and then it is routinely distorted.  Rick Perry has won re-election constantly, so he is the Great White Hope of the GOP until...."Oops."  Wendy Davis has gone "too far, TOO FAR, I say!" by including a wheelchair in a campaign ad about how tort liability is good for Greg Abbot, but not for other people.  Whatever; because this is what bugs me:

Davis has been less of a candidate than people thought she would be, and remains likely to lose the election.

Davis was never likely to win this election.  The fact people are still paying attention to her candidacy, that Greg Abbott is on FoxNews trying to milk this "controversy" for some mileage, should speak volumes.  But it doesn't, because no one understands the peculiar political culture of Texas.

When I was a child, Texas was a one-party state, and that party was the Democrats; the party of the Civil War, of the non-Reconstruction government of Washington, D.C.  The party not the party of Lincoln.  If the GOP has changed in the last few decades (as Mr. Pierce says they have), the Democratic Party changed with the ascension of LBJ to the White House.

You cannot overstate the power of one-party.  In Texas, no one voted for Republicans, because they were anathema.  The first non-Democratic governor elected in Texas since Reconstruction was elected in 1978.  You do the math.  Before that, Texas had some of the most nondescript men in the state as governor.  Texas Monthly even ran a memorable photo spread showing Dolph Briscoe (yes, that was his name) sitting in the Governor's office, smiling at the camera.  Reading from left to right, Mr. Briscoe slowly faded from view until there was just the empty chair, a metaphor for his governorship, according to the magazine.  It is a perfect illustration of the campaigning Democrats had to do, that a non-entity like Briscoe could be Governor of the state.  They weren't all picturesque figures like John Connolly.  Most of them were worse candidates  than Bill White, who ran four years ago.  Despite having been Mayor of Houston (a city that loves business), White couldn't get elected State Dogcatcher (if we had such an office, it would be an elected position), because he ran as a Democrat.  He ran a campaign so low-key, by the way, it makes the Davis campaign look like a Hollywood version of a "barn-burner."

But, you will say, Ann Richards charmed her way into the Governor's Mansion.  As a fluke, I will respond.  She was the last Democrat to sit in the Governor's office, and she lost in her second run to George W. Bush, as the state shifted allegiance from one party to the other.  She only won the first time because her opponent, Clayton Williams, refused to shake her hand at a debate, and the TV cameras captured that moment for posterity.

And this was a man who compared rape to the weather:  "There's nothing you can do about it, so just lie back and enjoy it."  Anybody want to call him less of a candidate than Wendy Davis?  But he probably would have won, if he'd shaken Ms. Ann's hand.  We're political neanderthals here, but we know how to treat a lady.

Will Davis lose?  Probably; but only because she never had a chance to begin with.  Although she has a GOTV effort working that hasn't been seen in this state since I was born.  I've been called, I've even been approached in my own front lawn, by Davis supporters.  I've literally never had that experience before.  Will it make a difference?  Time will tell.  Texas is a notoriously low-voter turnout state; perhaps she can change that.

But in the meantime, please stop telling me what a poor candidate Wendy Davis is.  She mopped the floor with Abbott in their one debate (on public broadcasting stations, who the only people who saw it were in major urban areas; and the rural vote swamps the "urban liberal" vote every time).  Her ads are sharp and pointed and good, even the "wheelchair" ad.  Can she win?  Only if she can turn out the vote.

And then the best thing she can do is replace as many Perry appointees as she can get her hands on in the next four years.  The Lege doesn't really listen to the governor, and it's gonna be in GOP hands for the foreseeable future.  But that's another thing the pundits who aren't from Texas don't understand.....