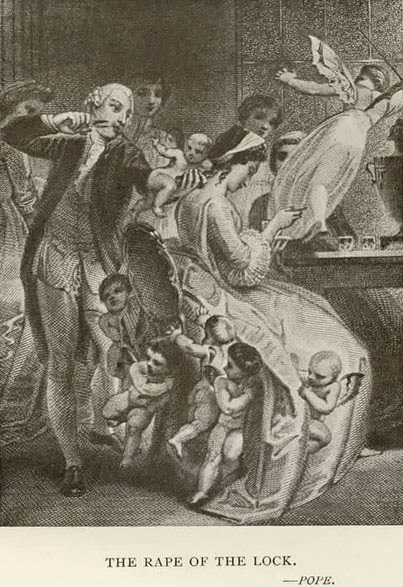 For various reasons, including the long stalemate in Washington, the movement to confront campus rape has shot up the list of liberal priorities. One can detect in this movement an impatience with balancing risk against liberty that, in other contexts, would be readily recognizable as a tone of creeping illiberalism.

Or it could be that rape has been a topic of political discourse for the last couple of years, including trying to redefine rape as "forcible rape", and declare that pregnancy after rape (a medieval canard, literally) is impossible (proving, by the way, that the rape is "legitimate," because, well, you know how women are)?

I stirred a strong discussion when I posted an entry about the complexities of consent, the central legal issue in a charge of rape (and pretty much the central social issue, too).  I have, in the recent past, used a textbook that included an essay on the question of how consent is defined in rape cases.  The essay presented examples from "stranger rape" (assault by a stranger, the kind we all think of as "definitely rape") to a case where a college student, drunk, slept with her close friend (male, and also drunk), and a day or two later decided it was a bad idea and the fault was his,  She condemned him on campus as a rapist, largely because she decided, as much as 72 hours later, that she had withdrawn her consent to the sexual intercourse.

California's affirmative consent law apparently tries to address this issue, although only in the context of sex on college campuses; it is not an alteration to California criminal law.  I don't know how effective this law should be, or even if it is a sound idea (the devil is in the details, and I haven't studied the details).  But it's the return to the question of consent that intrigues me.

Chait thinks this new law redefines most sex as rape.  The law, he says:

...requires all sexual activity among college students to obtain “affirmative, conscious, and voluntary agreement” and requires such consent be “ongoing throughout a sexual activity.”

Okay, and the problem is?

Sex, as I recall from my college years, is a delicate minefield of negotiations and desires.  I'm not sure "affirmative, conscious, and voluntary agreement" is too high a standard to set for an act that can involve identity, disease transmission, morality, intimacy, and self-consciousness (did I mention identity?).  And why shouldn't the consent be "ongoing throughout a sexual activity"?  Because once the train leaves the station, it ain't gonna stop 'til it reaches its destination?  I understand small animals can't control their bodily functions as readily as adults (pick up a housecat peeing in the wrong place and watch the stream continue unabated), but are we saying once she lets him in, it's too late to change her mind?  Isn't Chait's argument still aimed at making the male experience of sex normative, and the woman at some point just has to give up some agency in order to prevent unwanted outcomes (like a male college student being accused of rape)?

Is it "illiberal" to not want to turn off the issue of consent once penetration has occurred?  Or even before the clothes come off?  Isn't it more liberal to recognize there are two persons involved here, and both have equal agency in the event, and that agency doesn't come crashing to a halt at some event horizon beyond which the law cannot peer?

Besides, how does Mr. Chait think the culture of racist attitudes in this country began to change?  Because of Dr. King's inspiring speeches? Or because of changes in the law?