Will someone please pour the tea? 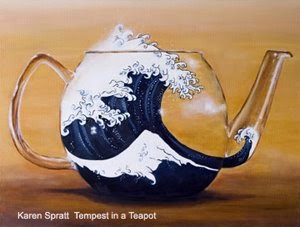 The comments, for once, are better than the commentary over at Esquire's Politics Blog:

But what is at issue here are not criminal acts, but the discovery process in a civil suit, and a discovery process aimed at pure speech -- namely, what the pastors said to their congregations during a religious service -- and that process should end at the church's door as well. If that isn't protected speech under the First Amendment's guarantee of freedom of religion, then it's protected speech under the First Amendment's guarantee of freedom of political speech. And if you want to make the argument that the latter consideration should be enough to revoke the tax-exempt status of the churches in question, I'm right there with you. But that's not what the city of Houston is up to here, either. It is going on a fishing expedition into what the pastors thought and what the pastors said. If the city wants to prove that the pastors encouraged their flocks to finagle the signature process, it simply has to find another way to do it. If it wants other documents to that effect, it should draw its subpoenas more narrowly.


First, let's get the facts narrowly right:  the City of Houston didn't draft these subpoenas; their pro bono non-city-employee lawyers drafted them.  A narrow point, but not an insignificant one, that leads us to Point the Second:

This lawsuit was not brought by the City, and these subpoenas are not an attempt by the City to use legal process to quell speech, even religious speech.  The City is a defendant in a lawsuit, and as such entitled to wide-ranging discovery into any information that might aid its defense of that lawsuit, even if the information obtained is not ultimately admissible under the rules of evidence.

And point the Third:  sermons are public speeches.  Many pastors put them on the church's website, advertise them on church signs, maybe even distribute copies available to anyone who walks into the sanctuary (which is generally open to anyone who can get in).  No church I know of closes to doors to non-members when it comes time for worship, or shoos out non-members for the sermon (the eucharist may be closed, but the sermon?)  There's nothing private or special about them, and there is no reason for the city not to ask to see them.

Because the purpose of these subpoenas to parties not parties to the lawsuit, is to find out what was being said about the petition process that tried to get signatures from church members and others, in order to force the HERO (Houston Equal Rights Ordinance) to be decided by referendum.  The City declared a number of signatures invalid, denied the petitions. and refused to hold the referenda election.  That's what the suit is about.

Which are not protected by the First Amendment because they are made in churches.  If a pastor, in time of war, gives aid and comfort to the enemy in a sermon, that's treason, despite the First Amendment.  If a pastor calls for the assassination of a President from the pulpit, that's still a crime.  You don't get a "King's X" because you claim what you said was a "sermon."  It simply doesn't work that way, and it shouldn't work that way.  Eugene Volokh's examples all come from criminal law (grand juries aren't part of civil lawsuits), so his conclusion that this subpoena even may be overly broad is inapplicable here.  Subpoenas in civil cases are always "overly broad" when compared with criminal cases.  If this one is truly too broad, the court which issued should retract it or modify it.

As I type the local NPR station is running its daily local news discussion program, and three people are discussing this very issue.  But they are interpreting it as an investigation of political speech from the pulpit.  The point of this discovery is not to catch the pastors out or turn them over to the IRS; it is to find out what was said about the petition process, and finding that out from sermons is as legitimate as finding it out from statements made in Fellowship Hall, or in e-mails, or in church newsletters.

What I really resent is how easily even people like Charlie Pierce are persuaded to agree with Sean Hannity.  The fact that you think Hannity could be right about anything should be enough to make you realize you need more information on the issue.  After all, if Mr. Pierce or Mr. Hannity were defendants in a civil suit, and they thought the sermons of local churches might provide them useful information for their trial, they'd make quite a different argument about this subject.