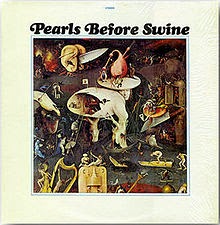 So today we get two posts at Salon on Religion (no surprise).  Neither from Amanda Marcotte, however.

One argues that Dawkins and the TV fundies are plying the same illegitimate nonsense.  Coincidentally, I found my copy of Karen Armstrong's book The Case for God (I think that's the title; it's in another room) that I never read and so started reading, and she spends some pages making essentially the same argument for religion and against reductionists like Dawkins as you'll find today in the Salon article.

The howler monkeys will have none of it; won't even engage the topic.   Instead, it's the usual shrieking and howling about "religion" (a term they define as narrowly and negatively as possible) and "New Atheists" (a label they despise) and "evidence" (a term never defined). A perfect example of pearls before swine.

The other is an excerpt from a book by a UCC pastor and professor in OKC.  The title sounded like it would tie in rather nicely with some observations about nuns by Fr. McBrien here.  Sadly, no; it's mostly a complaint that the church ain't what it used to be, popularity wise, immediately after WWII (our only historical touchstone, being as it still glows within recent memory, and ahistory is the attitude toward history or all good, red-blooded Americans.)  None of the facts he rather glibly cites about declining importance of the church is any different from what could have been, and was being, said about the church 50 years ago (literally), or has been said every decade since up to this one.  It, too, drew more ignorant howler monkeys.

I'm out.  When Karen Armstrong is a breath of fresh air, I've been in the jungle of intertoob comments so long I've gone native and lost any sense of what civilization is.  This I can't continue to do.  The swine eat the pearls and then turn and trample me.  Why spend any more time slopping them? (At Salon, I mean, not elsewhere.)

Gonna feel good to start living up to this resolution.