Of nature and destiny 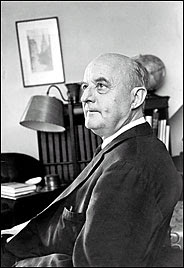 Just pluck this quote and regard it in the context of the current prevailing internet discussions (where atheism rules the world and will soon save us all), or consider it a much more cogent political analysis than anything you're likely to read almost anywhere:

I mean, let's face it:  David Brooks wishes he could argue like this.  Consider the heart of the argument there:

The idea of progress is possible only upon the ground of a Christian culture. It is a secularized version of Biblical apocalypse and of the Hebraic sense of a meaningful history, in contrast to the meaningless history of the Greeks.


That is not a fundamentalist statement that we are a "Christian" country, nor is it a gratuitous swipe at Hellenic Greece.  The ancient Greek concept of the cosmos, one reflected in their invention of the tragedy, (where if anything can go wrong, it will, with terrible consequences and the only redemption is owning up to your responsibility for those consequences), is that the original state of the universe (the cosmos, "everything"), is chaos.  Logos (reason, and word; two concepts that are closely related in Western thought) imposed order on chaos, giving rise to the world/universe we live in.  But that order did not dispense chaos, only quelled it; and eventually logos fails, and chaos returns.  So history has no meaning, no telos, no purpose; it's just what happens between the quelling of chaos and the return of chaos.*

So Niebuhr's argument is not that the idea of order in history proves Christianity; it only proves the importance of Christianity in western culture, and how much we take for granted ideas that are rooted in Christian thought, though we think them now to be wholly secular.  That, to me, is the interesting point.  And then, as Niebuhr points out, if we remove the doctrine of original sin, we "fail to do justice to the unique freedom of [humanity] or to the daemonic misuse which [we] may make of that freedom."

That's all.  Although it does tie in nicely with the idea that a little knowledge (something you cannot accuse Niebuhr of) is a dangerous thing.

*If you are a hardcore Zelazny fan, this is why Amber was balanced with the Courts of Chaos, and why Chaos was eternal and would eventually "win" the effort of Amber to organize the universe.  I confess I gave up on that series after the original five books; I don't even own those anymore, though I'm sorry I lost them.  They seem to be as lost to the mists of time in popular culture as they are to me.