Still unclear about the concept 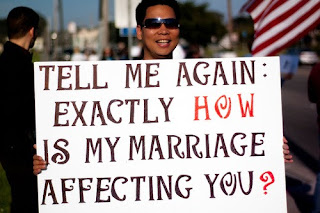 “If a gay couple came in and wanted us to provide them pizzas for a wedding, we would have to say no,” O'Connor told the news station.

The family later clarified for the news station that they would not deny service to a same-sex or non-Christian couple who came to eat at the restaurant.

In other words their "religious conviction" is based solely on the concept of marriage, not on providing services to homosexuals.  To be consistent, they would have to refuse to cater non-religious marriages, or maybe Catholic marriages, or Jewish ones, or Buddhist or Muslim ones (are pizzas even halal?  or kosher, for that matter?) because clearly they consider marriage to a a religious practice.

Except it isn't, not for Protestants.  So maybe they're devout Catholics and consider marriage a sacrament.  No service for Protestants, then; or atheists.  Or people who get married at the courthouse.

This rapidly devolves into absurdity, especially since they have no problem selling pizzas to gays and lesbians, they just don't want to be involved in "gay" weddings.  Unfortunately for them, that is the very definition of discrimination.  There is no rational basis for their decision, they just object to the law authorizing the marriage of certain persons.  If they said the same thing about mixed race marriages (which could be black and white, or Asian and Mexican, or any combination of "race" you care to make), how far would they be expected to get?

I wouldn't put it past the Supreme Court that handed down Hobby Lobby v. Burwell to decide that kind of discrimination is allowed (although Hobby Lobby didn't involve an issue of discrimination, so I could be wrong).  Of course, under Indiana law and federal law, homosexuality is not a protected class, so they are free to discriminate if they wish to.  Well, until the Supreme Court does for same sex marriage what Loving v. Virginia did for interracial unions.

But it seems to me Indiana's RFRA is kinda moot before that, except this kind of example underlines that Indiana's RFRA is aimed at allowing discrimination to survive that expected ruling.  Then again, if all that law does is allow people to discriminate against other people based on who is marrying whom, and nothing else, I could still see room for the courts to strike the law down now.

Because seriously, you can't preach it as round and square as that.