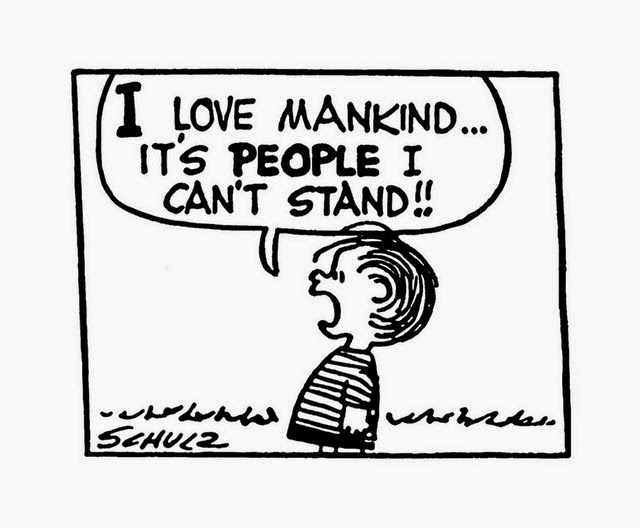 I'm moved by this, but I want to offer a nudge in another direction, too.

I remember, reading around the blogs on the evening of the Moore, Oklahoma tornado, being shocked at the mean, nasty things being said about people whose lives had been shattered within the hour, many people dying, many people injured, many people losing members of their families, their friends, their homes, their neighborhoods and their communities. The derision, the lack of respect and the judgdementalism on display that night, among alleged liberals, most with a higher education, was a kind of great divide opening up between us, the chasm that I noticed for the first time, the exact difference between liberalism and its opposite.


Not as surprising as it should be.  I've spoken to very decent, good-hearted people who insisted the panhandlers under the overpasses on I-10 here in Houston take in "$30,000.00 a year" (that my conversation partner thought this a princely sum indicates his age more than anything.).  He had no proof of this, but the outrage this number reflected, one he assured me he had from someone who had the experience to have the authority to verify this fiction, was an outrage which calmed his conscience at the fact that our society could produce so many destitute people they were reduced to begging with hand-printed signs.

If they were "rich," then he didn't have to feel concern for them.  I didn't damn him for that; I understood it.  If he respected them, if he regarded them as human beings, as souls made by God undeserving of poverty and such suffering, he would despair because there was so little he could do for them.  He wasn't right to despise them, to discard them as liars living comfortably off the money they begged (rather than doing "legitimate" work, begging somehow being "easier" than holding down a job with an employer); but he was doing it to salve his conscience.  He was doing it so despair wouldn't overwhelm him.

"It is simply not possible to act in good faith toward people one does not respect, or to entertain hopes for them that are appropriate to their gifts." If there was ever a worth while sentence summing up the absolute prerequisite for any kind of liberalism, for any kind of democracy, that would be it. It is worth everything that I've ever read from the hands of Jefferson or Madison and fully as essential as any of the best that came from Abraham Lincoln. America lost that in the past century and more. It's the reason we have devolved into a corporate oligarchy in which Barack Obama is far more the servant of the oil industry than he is of The People, the reason that The People tolerated having George W. Bush and Dick Cheney imposed on us by a corrupt Supreme Court and an even more corrupt press.

No, it isn't possible to act in good faith toward people one does not respect; which is the whole point of refusing to extend our respect to them.  But this is not new; 'twas ever thus.  Mother Jones famously lead the "Children's Crusade" to Teddy Roosevelt's summer home in New York state, when TR was President.  She wanted the President to see the children who were forced to labor in dangerous factories, often on the graveyard shift with little adult supervision, poor wages, and in great danger to their lives and bodies.  TR turned them away.  His cousin FDR would finally pass legislation regarding child labor only as a means to clear the way for unemployed adults to take those jobs.  Today we are appalled when Newt Gingrich says elementary school children should work as janitors to pay for their schooling or their "free" lunch.  No one was appalled when TR told Mother Jones to get lost.  No one stains TR's reputation with that event, even today.

As recent legal scholars have pointed out, the Supreme Court has always been a blockage in the national pipeline of progressivism (such as that pipeline ever was).  The Warren Court was the aberration, not the norm.  I've rather lost interest in the "wisdom" of Thomas Jefferson, simply because he never did anything out of charity, never proposed any law or scheme of thought or even eloquent 18th century sound-bite to relieve by one matchstick's worth, the burden on the poor, the outcast, the marginalized.  I try not to judge Jefferson for this, so much as put him in perspective.  His opinions on religion, his "Bible," are not even a curiosity to me anymore.  They are obstacles; I step around them.  Praise him?  For what?  For perpetuating stereotypes about the natives here ("He has excited domestic insurrections amongst us, and has endeavoured to bring on the inhabitants of our frontiers, the merciless Indian Savages, whose known rule of warfare, is an undistinguished destruction of all ages, sexes and conditions.")  For being an unrepentant owner of other human beings?  For the Louisiana Purchase ?  (well, that got us Louisiana and New Orleans, I can't really fault him for that.)  He had his intellectual points, but I'm not terribly impressed with what he did for his fellow human beings.

It is broken, but it has always been broken.  As I had occasion to say at a funeral awhile back, quoting Leonard Cohen, "There are cracks, cracks in everything; that's how the light gets in."  We surround ourselves with walls, in order to protect us; and then we wonder at how deep the darkness is.

More and more I am convinced that the heart of Christianity is not doctrine, but compassion; compassion expressed first and foremost through hospitality.  Paul didn't convert people to Christianity via the letter to the Romans; he did it establishing house churches. "House" in this case doesn't mean the single-family residence we think of today.  A residence was also a place of business and consisted of a very extended family connected to a benefactor upon whom others depended.  Social lines were stratified, and children, in the Victorian phrase, were "seen and not heard."  As the British upper class did later, the Roman model was not to dine en famille, but segregated by age and social class.   Servants didn't dine with masters, children didn't dine with parents. Imagine the table at "Downton Abbey" surrounded by all the staff, the family, and even the toddlers.  That was the eukaristo that Paul's house church celebrated:  slaves and masters, parents and children, bosses and employees, all dining as equals.  Small wonder, as TC pointed out in comments below, that Crossan notes how important food was, is, in the gospels; and why a common meal, which eventually became a very ritualized meal, is still central to Christian worship.

If the People are broken and discouraged, surely this is the antidote.  In the movie I mentioned sometime back, Kevin Costner's character finally connects with his athletes when he's invited into the home of one of them, and he shares a meal with the family.  They welcome him, and he in turn becomes equal to them.  In the rest of the movie, every festive and important occasion or point in the story, involves sharing a meal with a wider and wider community of athletes and their families.

That, too, is how the light gets in.

If we stand in judgment, as Crossan also pointed out, then we get placed under judgment, too.  The only way out of that cycle is to refuse to judge.  And the simplest way to refuse to judge is to sit at the table together, eating the meal in common, with everyone welcome and no one refused.

Let me put that quote above back in context:

When we accept dismissive judgments of our community we stop having generous hopes for it. We cease to be capable of serving its best interests. The cultural disaster called “dumbing down,” which swept through every significant American institution and grossly impoverished civic and religious life, was and is the result of the obsessive devaluing of the lives that happen to pass on this swath of continent. On average, in the main, we are Christian people, if the polls are to be believed. How is Christianity consistent with this generalized contempt that seems to lie behind so much so-called public discourse? Why the judgmentalism, among people who are supposed to believe we are, and we live among, souls precious to God—300 million of them on this plot of ground, a population large and various enough to hint broadly at the folly of generalization? It is simply not possible to act in good faith toward people one does not respect, or to entertain hopes for them that are appropriate to their gifts. As we withdraw from one another we withdraw from the world, except as we increasingly insist that foreign groups and populations are our irreconcilable enemies. The shrinking of imaginative identification which allows such things as shared humanity to be forgotten always begins at home.


Part of the problem is the "generalized contempt" we have for others, because we think of them in generalities.  My family includes blue-collar workers:  policemen, maintenance workers, the like.  I was reminded how "simple" they were when I visited them recently, meeting in a small church many would consider "conservative" and even "ignorant."  They are good people, kind people, and the people they know are the same.  Not saints, not exemplary by worldly standards, but good nonetheless.  I don't want to elevate them with praise, but they are people worth knowing.  But you have to know them individually.  As a group they fit all manner of categories that other groups would consider inappropriate, in some way.  It would be easy to dismiss them, or people like them, with a generalized contempt; and when I say that, I'm looking in the mirror.

The contempt is, I think, in part the problem of "public discourse."  Such discourse of necessity creates categories.  When Jefferson wrote of the "savages" bedeviling the colonies, he was writing for a European audience who would precisely consider them so.  That contempt made it easier, in later years, to exterminate the natives.  "It is simply not possible to act in good faith toward people one does not respect."  And, equally, it is impossible to respect people one puts in a category for dismissal.  As I've said too often, that's precisely where so many "New Atheists" want to put Christians.  In the extreme, it becomes bigotry.   Bigotry is the ugliest way of withdrawing from one another.

Christianity is simply not consistent with judgment.  "Do not judge, and you will not be judged."  But if we do not judge, how do we know who to respect, who to care for?

Well, yes.  That's the point, isn't it?  Lucy, in Peanuts, once challenged Linus that he didn't love everything in the world, because he couldn't love gila monsters.  Linus replied that if he knew what a gila monster was, he'd love it.  You can't love a gila monster if you don't know what it is.  You cannot love the world; you don't know what it is.  You can only love those you know.  Or, as Voltaire wisely put it:  we must each cultivate our own garden.  You can't love the world; but you can love those you know in the world.