Digging under the weeds 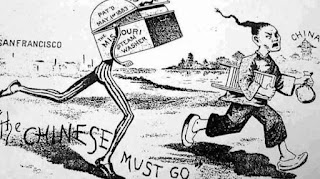 Just because I like things to be complete, and because the previous post was long enough, I add this by way of an update:

In the 1980s, the question of birthright citizenship began to take a similar shape as the “anchor baby” panic we see today. In their influential 1985 book Citizenship Without Consent: Illegal Aliens in the American Polity scholars Peter Schuck and Rogers Smith argued that Congress could deny birthright citizenship to the children of unauthorized migrants, noting that Wong Kim Ark involved the child of lawfully admitted noncitizens. Both opposed the idea as a matter of policy.

Graglia leans heavily on this book in his argument, but doesn't give Schuck and Smith credit for the legal argument he tacitly claims as his own.  Still, there's no difference between them:  both rest on the idea that the parents of Wong Kim Ark were here legally, and so children of illegal immigrants have no birthright citizenship.

I still don't get the distinction, which Graglia rests on legal immigrants in America being subject to foreign authority, while "illegal" immigrants in America are....not?  That really just doesn't make any sense, especially in light of the cases holding that "persons" are entitled to due process and equal protection of laws in America, not just "citizens."

These people just really don't like the idea of non-Europeans in America.