The Dog Days of August 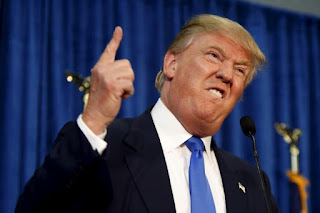 There are, I have come to learn, two legal theories for citizenship:  jus soli, and jus sanguinus.  The former means one is a citizen of the country where one is born; "birthright citizenship," although that term's a misnomer as it actually covers both theories of citizenship (both apply to birth circumstances).  That is the law in the U.S., and in France.  The other means you are a citizen by blood:  so if you are of German descent, you are a German citizen by right of birth because of your parents.

Yeah, I know, in the historical context of Germany, that seems kind of creepy to me, too.  Now imagine that becoming the standard for citizenship in the U.S.

Until 1924, Native Americans were not U.S. citizens unless they left tribal lands and basically renounced any connection to their tribe.  It was a more complex situation than that, but that boils it down to the fine fairly well.  And, granted, the U.S. does also recognize jus sanguinus citizenship; it's why Ted Cruz is a U.S. citizen, despite being born in Canada to a Cuban national father.  But if we start making U.S. citizenship solely a matter of parentage, does anyone doubt the burden of proof would be heavier on some babies than on others?

Interestingly this question revolves around the 14th amendment, which some now want to argue (as some always have) that it goes too far.  That's interesting because the impetus for the 14th Amendment was the notorious Dred Scott decision, which declared that blacks born in America were not citizens by birth.  The basis for that ruling was jus sanguinus:  "A free negro of the African race, whose ancestors were brought to this country and sold as slaves, is not a 'citizen' within the meaning of the Constitution of the United States."  The response to that is the first sentence of the 14th Amendment:

There is no definition of citizenship in the Constitution before the 14th Amendment, but it's clear jus soli was the assumed legal doctrine for the new nation.  Congress was explicitly given power to decide how citizens were naturalized; but Congress was not given power to decide who are citizens of the U.S.  The only clause in the Constitution that addresses who citizens are (other than the fact slaves are chattel and not human beings) is the qualifications for President:

That clause doesn't set the standard for citizenship as jus soli, but it implies it strongly enough that there was no real question about it until Dred Scott; and the desire to overrule that decision was so strong what is arguably the most important amendment to the Constitution was approved 11 years later.

And now the impetus to undo the 14th Amendment is the fear of a brown planet.  Lest you think I exaggerate, attend to the words of Donald Trump:

“We’ve got to bring our country back,” Trump told Bill O’Reilly on “The O’Reilly Factor” Tuesday night. “There a [sic] crime wave, a literal crime wave, Bill. You know, we’ve spent the last year $113 billion on illegal immigrants.”


No, I don't know where that number comes from; it's Trump, he likes to think "yoooge!"  And when Bill O'Reilly(!) tells Trump mass deportations are impossible because of the requirement of due process, Trump has a ready answer:

Trump insisted that O’Reilly was “wrong about the 14th Amendment,” adding that “there are many lawyers saying that that’s not the way it is” in terms of the “anchor baby” problem.

“The courts are never going to allow mass deportation without due process for each and every” undocumented immigrant, O’Reilly retorted. “Do you envision federal authorities kicking in doors in barrios around the country, dragging families out and putting them on buses?”

Trump repeated his earlier claim that, despite the guarantees offered by the 14th Amendment, “many of these people do not really have American citizenship, and we’ve got to take back our country.”

There's a lot of just sheer ignorance there, beginning with the concept of due process.  Numerous Supreme Court decisions have held that, under the 14th Amendment, all persons (not citizens, persons) subject to the jurisdiction of the United States, are likewise entitled to due process and equal protection under the law.  It's the reason public schools in America have to educate the children of "illegal immigrants," be those children American citizens or not.  Indeed, about the only benefits conferred by American citizenship are the right to vote (which the majority of Americans never exercise) and the right not to be deported from the country.  The idea that citizenship entitles you to a raft of goodies which, apparently, only immigrants and poor people have access to (the rest of us have to work for a living) is ludicrous on its face (and yes, the contradiction that "brown" citizens get goodies that "white" citizens don't get, is fundamentally racist).  By the way, another effect of the 14th amendment was to extend due process and equal protection of laws to "persons," a term the Court has read as being much broader than "citizen."  That, too, was a repudiation of Dred Scott.

O'Reilly is right about due process, in other words, and it's in the law because of the 14th Amendment.  Trump, you will note, doesn't really want to repeal the Amendment; he just wants to re-interpret it.  Well, the first sentence of it, anyway.  And what he's baldly asking for is that we "take back our country" from the brown people.

Which is just starkly racist language. The very kind of starkly racist language the 14th Amendment was meant to eradicate from American Constitutional law.  I'm sure it's popular language with the minority of people who both identify with the GOP and are paying attention to politics in the August before primary season.  But let's be honest:  it's going to sink Trump and the GOP to the bottom of the deep blue sea if this language gets on the national radar next year, when more people start listening to what these people are saying.

And if you fear a President Trump could carry out his threat, consider the bureaucracy of the U.S. government he would have to make complicit in his illegal and unconstitutional reading of the law.  Consider that to this day the CIA fears reprisal for what it did in torture chambers around the world under W's assurance it was "legal."  Consider this would be in the open, in America, and require the complicity of literally thousands of people from the Cabinet down to border guards and ICE agents, not to mention judges from the Supreme Court to the immigration bench.*

In short:  ain't never gonna happen.  Anymore than the 14th Amendment is going to be reinterpreted to mean what it clearly doesn't mean, or is going to be repealed and replaced with language that says, in America, it's your blood that counts.

*To begin to make this work, Trump will either need a massive bureaucracy to start tracking who is born to whom, or he'll have to violate the Constitutional ban on ex post facto laws so he can declare certain classes of people "non-citizens" he can immediately deport.  Granted this could happen in a Hollywood movie, but in reality? Not even President Trump could make that happen.