"May you live in interesting times" 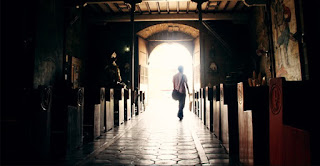 So I keep reading/hearing stories about "Millennials" who don't attend church because it isn't interesting, or they don't have to (the "You're not the boss of me now!" generation, I guess), or something.  And it all means church as we know it is doomed because this generation will wipe it from the face of the earth, either by extreme atheism, or just by extreme apathy.

Bollocks.  And the main problem with the argument is:  Millennials are not the only generation which will be alive in the America of the future.

My parents, for example, are still alive.  They are part of the "Greatest" generation, f/k/a the "Builder" generation, at least B.B. (Before Brokaw).  I'm a boomer, my daughter a Millennial.  My parents will be gone some day soon (sad but true); I hope to be here another 30 years (matching my parents' longevity), my daughter is only in her early 20's.  Her generation may, like the Boomers, be the demographically dominant generation for the next 40 years or longer, but they won't be the only generation in America.

And they'll be about as uniform as Boomers and Gen X'ers were; which is to say, not really much at all.

Not all Boomers went to Woodstock, for example; or screamed in Shea Stadium for the Beatles, or protested the war or marched for Civil Rights.  The leaders of the Civil Rights movement, by the way, were all from the prior "generation."  They weren't Boomers.  Some Boomers were just old enough to march or otherwise get involved; some of us were still in junior high.  I was 14 when Woodstock happened, 15 when the shootings at Kent State occurred.  I'm old enough to have attended the last concert tour (the only concert tour) for CSNY, and to hear them close with "Ohio."  And I was born pretty much in the middle of the "Baby Boom" generation.

I was also too young to go to Vietnam.  I participated in the last draft lottery (what choice did I have) but I had a high number, and the war was winding down by then, anyway.  I'm a Boomer; but I had none of the experiences one associates with Boomers.

So the whole idea of "generations" acting the same is about as sound as judging people by their birthdates and the astrology column in the newspaper (if those still exist).

And the idea that generations live in a vacuum free from other generations is really kinda silly.  My parents have been instrumental in their church since I was a child.  Had I stayed in my hometown and continued to attend that church, I'd have had to bend to their interests.  Old people mostly run churches, for better or worse (it's not always for worse).  I've met people my age who act preternaturally old in order to fit in with the operation of their church.  And I've attended people full of "old people," which is to say people not of my generation (or the preternaturally old, people of my "generation" who act like they grew up with my parents).

We Baby Boomers were supposed to wipe such people from the stage of history, and take over that stage, and establish an egalitarian society of racial harmony and classless equality.  Except, of course, not all of us were bent on that goal; so it never happened.  We were also supposed to abandon the church in droves, and leave the buildings lifeless and empty.

And then the Jesus Freaks came along, and after them the mega-churches and the TV preachers who, as John Oliver reminds us, are still among us.  And church affiliation actually rose between the 1960's and the 1990's (I'm tired of linking to that chart; take my word for it).

So the Millennials may well emulate their parents and stay away from church in droves.  It may even affect the Catholic church (which has already been effected, thank you very much; but that's another story).  What I don't think is going to happen is an apocalypse or a Ragnarok or an end to all things.  As John Oliver points out, there are some 350,000 congregations in the U.S. (that's roughly 7,000 per state, and since I doubt Montana or Arkansas or Alaska have 7,000 churches apiece, the concentration is much higher in some states than in others), and church is an old and venerable pillar of American culture.

As is disdain for church.  The love/hate relationship of Americans for churches is hardly a product of Millennial cynicism, and not even uniquely strong among Millennials.  But, as I say, they will never have the field entirely to themselves; they will never determine the validity of cultural institutions.  Millennials may turn away from churches, but they won't determine the fate of denominations.  Old people will still be there, even if fewer in number as the youngest generation becomes the oldest.  Boomers will not uniformly die and leave the stage in some kind of bizarre anti-rapture.  Generations younger than Millennials may follow the pattern of their Millennial parents but, if history is any guide, they may turn to institutions like churches just because their parents despise it.  Who can say?

I can say, from the ripe and old perspective of 60 years, the Millennials are too young to make pronouncements about the future based on the history they have experienced, or just read about.  In fact, the wisest guess you can make about the future is that it will look much like the present; which is probably why we all imagine the future will be Apocalypse or Ragnarok or some dramatic change that we get to witness, that we get to live through.

It's far more interesting than to think the history you live through won't be all that dramatic, or interesting, or even notable.  But the older I get, the more I think that's why some people seem to long for even catastrophe, the collapse of social institutions if not war and calamity:  because it would mean they were alive to see it, that they'd have something to tell their grandchildren other than "I remember iPhones and when Donald Trump actually ran for President."