Something's happening here, what it is ain't exactly clear.... 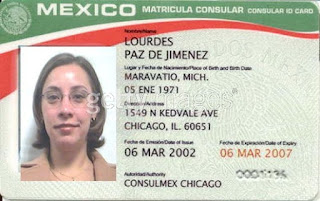 And if you want to know what America would look like if the 14th Amendment were reinterpreted, you have only to look to Texas:

Juana, for her part, did not encounter problems presenting her matrícula along with hospital records to obtain birth certificates for her two older children, who are 13 and 8 years old. But obtaining a birth certificate for her youngest child has proved challenging. She has lost work lately because she cannot get her 1-year-old daughter accepted into day care without a birth certificate.

“She should have the same rights as a child born to American parents,” she said

I would argue, per Plyler v. Doe, that a birth certificate should not be required for day care, but that would be yet another lawsuit.

And Texas is not saying these children are not U.S. citizens; it is just saying they can't get a birth certificate.

I honestly don't remember providing any identification papers when my daughter was born in Texas over 23 years ago.  Then again, I'm white, and my wife is white, and neither of us have so much as an "Hispanic" name.  We are blandly Anglo, and therefore acceptable in Texas.  Well, that and my daughter was born long before 2008, when the rules changed, or 2013, when enforcement of that change finally began.

The argument of the Texas Department of Health is fairly consistent:

... Chris Van Deusen, a spokesman with the Texas Department of State Health Services, said the policy has nothing to do with discrimination.

"DSHS provides certified birth certificates without regard to the requestor's immigration status and has never accepted the matricula consular as adequate identification," he said.

Van Deusen also said that the problem for the state of Texas is that the documents used to obtain consular IDs "are not verified by the issuing consulate." He added that other states and federal agencies reject consular IDs for the same reason.

The state of Texas provided CNN with a list of valid documents of identification. The list includes foreign passports accompanied by a visa issued by the U.S. State Department, a Mexican voter registration card or even a foreign identification with an identifiable photo of the applicant.

The Texas Department of State Health Services said in an emailed statement that it “provides certified birth certificates without regard to the requester’s immigration status and has never accepted the matrícula consular as adequate identification. This is because the documents used to obtain the matrícula are not verified by the issuing consulate.”


Except those same articles, and others, point out this form of i.d. was accepted by the state of Texas until 2013; and there's nothing in Texas law to indicate it is not acceptable as a form of i.d.

The discussion here is also helpful; and it appears this has caught the attention of Democrats in Texas, who don't like this new policy one bit.  But you know, I'm not so concerned with what Donald Trump represents or what crazy new thing Ted Cruz said; I'm much more concerned with what's going on in these "laboratories of democracy" that not even Charlie Pierce is paying attention to.

And if you think this subject isn't about race, because in America it's never about race, think again.  A quick Google search found the following links:  "The Matricula Consular: The Only Card an Illegal Immigrant Will Ever Need;" "Mexican Sham ID;" "IDs for Illegals: The 'Matricula Consular' Advances Mexico's Immigration Agenda."  Clearly this is another of those "issues" that's running under the national radar, but running loudly enough in the state where the Governor was terrorized by a handful of loonies in Bastrop, that it got the attention of the Texas Department of Health.

Mexico has, by the way, been issuing these cards for over 130 years; and most American law enforcement are quite happy to use them as identification.  What we are seeing is yet another crackpot meme finding its way into government policy.

Donald Trump and Ted Cruz don't bother me; this kind of subversion of law by implicit racism, does.

UPDATE:  I got curious.  This is the where you go to order a Texas birth certificate.  The "Mail Application for Certified Copy" link takes you to a form that notes, boldly, it requires a photocopy of a valid photo i.d.  A valid secondary source for such an i.d. can include a student i.d.

But not a matricula consular, because it's not verified by the consulate.  Whereas a student i.d. is verified by...who, exactly?
Posted by Rmj at 4:00 PM