"All watched over by machines of loving grace...." 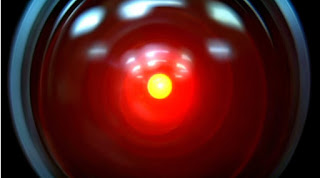 Some mechanists have conceded that a consistent machine could be out-Godeled by a mind, but have maintained that the machine representation of the mind is an inconsistent machine, but one whose inconsistency is so deep that it would take a long time ever to come to light. It therefore would avoid the quick death of non-selectivity. Although in principle it could be brought to affirm anything, in practice it will be selective, affirming some things and denying others. Only in the long run will it age - or mellow, as we kindly term it - and then "crash" and cease to deny anything: and in the long run we die - usually before suffering senile dementia. Such a suggestion chimes in with a line of reasoning which has been noticeable in Western Thought since the Eighteenth Century. Reason, it is held, suffers from certain antinomies, and by its own dialectic gives rise to internal contradictions which it is quite powerless to reconcile, and which must in the end bring the whole edifice crashing down in ruins.* If the mind is really an inconsistent machine then the philosophers in the Hegelian tradition who have spoken of the self-destructiveness of reason are simply those in whom the inconsistency has surfaced relatively rapidly. They are the ones who have understood the inherent inconsistency of reason, and who, negating negation, have abandoned hope of rational discourse, and having brought mind to the end of its tether, have had on offer only counsels of despair.


Against this position the Godelian argument can avail us nothing. Quite other arguments and other attitudes are required as antidotes to nihilism, and the Godelian argument can be seen as making this reductio explicit. And it is a reductio. For mechanism claims to be a rational position. It rests its case on the advances of science, the underlying assumptions of scientific thinking and the actual achievements of scientific research. Although other people may be led to nihilism by feelings of angst or other intimations of nothingness, the mechanist must advance arguments or abandon his advocacy altogether. On the face of it we are not machines. Arguments may be adduced to show that appearances are deceptive, and that really we are machines, but arguments presuppose rationality, and if, thanks to the Godelian argument, the only tenable form of mechanism is that we are inconsistent machines, with all minds being ultimately inconsistent, then mechanism itself is committed to the irrationality of argument, and no rational case for it can be sustained.

Via Thought Criminal I get this marvelous analysis of mechanistic thinking, of which these are the concluding paragraphs.  What a lovely way to start the day.