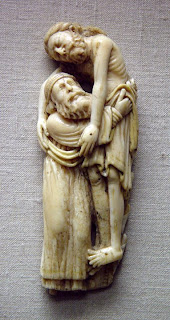 In the canonical gospels it is consistently the women who pay attention to the body of Jesus. They appear in the Gospel of Mark for the first time, here; but they are two of many, we are told. The irony is not lost on Matthew, who records the days before Jesus' death this way:

Verily I say unto you, Wheresoever this gospel shall be preached in the whole world, there shall also this, that this woman hath done, be told for a memorial of her.

And yet to this day, we don't know who she was. Most memorials are like that, though. We see the statue but have no idea who the person was, or what they did. Or we hear the stories, yet misunderstand them or lose their meaning over time. The crucifixion stories are especially subjects of this problem.

And when it had already grown dark, since it was preparation day (the day of the Sabbath), Joseph of Arimethea, a respected council member, who was himself anticipating God's imperial rule, appeared on the scene, and dared to go to Pilate to request the body of Jesus. And Pilate was surprised that he had died so soon. He summoned the Roman officer and asked him whether he had been dead for long. And when he had been briefed by the Roman officer, he granted the body to Joseph. And he bought a shroud and took him down and wrapped him in the shroud, and placed him in a tomb that had been cut out of rock, and rolled a stone up against the opening of the tomb.

The writer of Mark's gospel is especially concerned to allay stories that Jesus of Nazareth was not dead, and so never rose from the dead. Skepticism abounded, then as now, to such a claim. Joseph of Arimethea is a wealthy follower of Jesus, another unknown person in Mark's gospel until this point. He appears in order to make the burial in a tomb of a Nazarene peasant executed for sedition, for threatening the Pax Romana, credible. Dom Crossan argues it is more likely such a criminal was removed from the crucifix when dead, and tossed in a shallow pit, to be devoured by dogs and carrion eaters. It is not, on the other hand, impossible that a person notable enough to leave such a following behind, would be notable enough in his lifetime to have rich followers who would wish to honor their teacher in death.

But Crossan's version helps us strip away from of the patina of the story after 2000 years, to see it as less an inevitabilty leading to Easter morning, and more as a finality ended before Holy Saturday.

Versions are important here. One version of the Easter story relates it to Ishtar and Sumeria, "[i]n the Sumerian tradition, in which much of the Bible is rooted."  The Gospels, however, are also rooted in Greek traditions, no surprise as they are written in Greek, not in a Semitic tongue like Aramaic or Hebrew. Stories of resurrection of heroes are not unknown in Greek literature; they reflect the special favor of the hero by the gods. Paul's account of the resurrection (which, aside from the eucharist, is all Paul ever tells about the life of Jesus of Nazareth) reflect this understanding of the resurrection. Is the story related to that of Dumuzi and Ishtar? Frankly, that one sounds more like Persephone than Jesus of Nazareth, especially as the "descent into hell" and the "harrowing of hell" are not mentioned in the gospels at all, and come much later in Christian doctrine. But again, versions and interpretations highlight the humanity of the stories. These are myths, perhaps, but "a myth traditionally is not just a false tale. Rather, it is a story that, at least at one point in time, had a very powerful spiritual resonance. The story of death and resurrection is one such story." Restoring the power to that story is ever the task of the body of believers.

And Mary of Magdala and Mary the mother of Joses noted where he had been laid to rest.

It is a woman who anoints Jesus in Matthew, in Luke, and in John. And in all four stories, it is women who come to the tomb first. Women care for the dead as if they were living; or, more importantly, as if death really meant something.

2000 years later, it still does, and still should. We gather to worship and pray at the tomb of a crucified god.

14:3 Do you fix your eyes on such a one? Do you bring me into judgment with you?

14:5 Since their days are determined, and the number of their months is known to you, and you have appointed the bounds that they cannot pass,

14:6 look away from them, and desist, that they may enjoy, like laborers, their days.

14:7 "For there is hope for a tree, if it is cut down, that it will sprout again, and that its shoots will not cease.

14:8 Though its root grows old in the earth, and its stump dies in the ground,

14:9 yet at the scent of water it will bud and put forth branches like a young plant.

14:10 But mortals die, and are laid low; humans expire, and where are they?

14:11 As waters fail from a lake, and a river wastes away and dries up,

14:12 so mortals lie down and do not rise again; until the heavens are no more, they will not awake or be roused out of their sleep.

14:14 If mortals die, will they live again? All the days of my service I would wait until my release should come.

3:1 I am one who has seen affliction under the rod of God's wrath;

3:2 he has driven and brought me into darkness without any light;

3:3 against me alone he turns his hand, again and again, all day long.

3:4 He has made my flesh and my skin waste away, and broken my bones;

3:5 he has besieged and enveloped me with bitterness and tribulation;

3:6 he has made me sit in darkness like the dead of long ago.

3:7 He has walled me about so that I cannot escape; he has put heavy chains on me;

3:8 though I call and cry for help, he shuts out my prayer;

3:9 he has blocked my ways with hewn stones, he has made my paths crooked.

3:19 The thought of my affliction and my homelessness is wormwood and gall!

3:20 My soul continually thinks of it and is bowed down within me.

3:22 The steadfast love of the LORD never ceases, his mercies never come to an end;

3:23 they are new every morning; great is your faithfulness.

31:1 In you, O LORD, I seek refuge; do not let me ever be put to shame; in your righteousness deliver me.

31:2 Incline your ear to me; rescue me speedily. Be a rock of refuge for me, a strong fortress to save me.

31:3 You are indeed my rock and my fortress; for your name's sake lead me and guide me,

31:15 My times are in your hand; deliver me from the hand of my enemies and persecutors.

31:16 Let your face shine upon your servant; save me in your steadfast love.