Picking up on what trex said 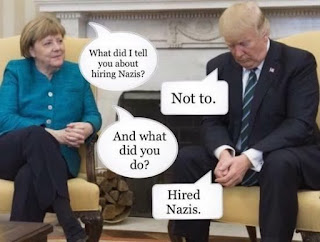 Speaking of signs and what they point to:


I would love to see reporters ask him to name five federal regulations he likes the least, discuss the pros and cons of each, and the benefit he would see in eliminating each one. He can't do it. He is unaware of any specific regulations. He couldn't name one if you asked him. All he knows is that someone told him they were bad for business.


Then you're gonna love this:

TRUMP: Elijah Cummings [a Democratic representative from Maryland] was in my office and he said, “You will go down as one of the great presidents in the history of our country.”

TRUMP: And then he went out and I watched him on television yesterday and I said, “Was that the same man?”

TRUMP: But I said, and I liked him, but I said that was really nice. He said, in a group of people, “You will go down as one of the great presidents in the history of our country.” And then I watched him on television and I said, “Is that the same man that said that to me?”

“During my meeting with the president and on several occasions since then, I have said repeatedly that he could be a great president if … if … he takes steps to truly represent all Americans rather than continuing on the divisive and harmful path he is currently on.”


As Aaron Blake points out:


And before I can get this posted:

President Donald Trump reflected on his first weeks in office Thursday, telling reporters aboard Air Force on that “I think we’ve had one of the most successful 13 weeks in the history of the presidency,” according to a pool report.


He's been in office 11 weeks.  And what dictionary is he using?

But that's not all, folks!

“I think what Assad did is terrible,” Trump told reporters traveling with him on Air Force One. “I think what happened in Syria is a disgrace to humanity and he’s there, and I guess he’s running things, so something should happen.”


"Weakness" and "irresolution" is when Obama does it.  What is Trump going to do?

"I don’t want to say what I’m going to be doing with respect to Syria."


Well, at least he's resolute in his irresolution.  Besides, how was he to know Assad was a brutal dictator killing his own people, even babies?*

*and obviously THIS was written before events last night caught up to it.