Shall these bones live: Fifth Sunday in Lent 2017 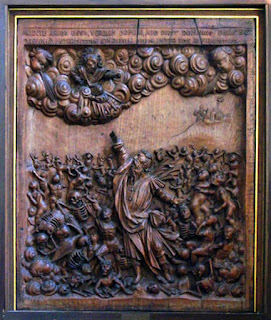 Selections from the lection for the day

Ezekiel 37:1-14
37:1 The hand of the LORD came upon me, and he brought me out by the spirit of the LORD and set me down in the middle of a valley; it was full of bones.

37:2 He led me all around them; there were very many lying in the valley, and they were very dry.

37:4 Then he said to me, "Prophesy to these bones, and say to them: O dry bones, hear the word of the LORD.

37:5 Thus says the Lord GOD to these bones: I will cause breath to enter you, and you shall live.

37:7 So I prophesied as I had been commanded; and as I prophesied, suddenly there was a noise, a rattling, and the bones came together, bone to its bone.

37:8 I looked, and there were sinews on them, and flesh had come upon them, and skin had covered them; but there was no breath in them.

37:9 Then he said to me, "Prophesy to the breath, prophesy, mortal, and say to the breath: Thus says the Lord GOD: Come from the four winds, O breath, and breathe upon these slain, that they may live."

37:10 I prophesied as he commanded me, and the breath came into them, and they lived, and stood on their feet, a vast multitude.

37:11 Then he said to me, "Mortal, these bones are the whole house of Israel. They say, 'Our bones are dried up, and our hope is lost; we are cut off completely.'

37:12 Therefore prophesy, and say to them, Thus says the Lord GOD: I am going to open your graves, and bring you up from your graves, O my people; and I will bring you back to the land of Israel.

37:13 And you shall know that I am the LORD, when I open your graves, and bring you up from your graves, O my people.

37:14 I will put my spirit within you, and you shall live, and I will place you on your own soil; then you shall know that I, the LORD, have spoken and will act," says the LORD.

8:7 For this reason the mind that is set on the flesh is hostile to God; it does not submit to God's law-- indeed it cannot,

8:8 and those who are in the flesh cannot please God.

8:10 But if Christ is in you, though the body is dead because of sin, the Spirit is life because of righteousness.

11:2 Mary was the one who anointed the Lord with perfume and wiped his feet with her hair; her brother Lazarus was ill.

11:4 But when Jesus heard it, he said, "This illness does not lead to death; rather it is for God's glory, so that the Son of God may be glorified through it."

11:5 Accordingly, though Jesus loved Martha and her sister and Lazarus,

11:6 after having heard that Lazarus was ill, he stayed two days longer in the place where he was.

11:7 Then after this he said to the disciples, "Let us go to Judea again."

11:8 The disciples said to him, "Rabbi, the Jews were just now trying to stone you, and are you going there again?"

11:9 Jesus answered, "Are there not twelve hours of daylight? Those who walk during the day do not stumble, because they see the light of this world.

11:10 But those who walk at night stumble, because the light is not in them."

11:11 After saying this, he told them, "Our friend Lazarus has fallen asleep, but I am going there to awaken him."

11:13 Jesus, however, had been speaking about his death, but they thought that he was referring merely to sleep.

11:16 Thomas, who was called the Twin, said to his fellow disciples, "Let us also go, that we may die with him."

11:17 When Jesus arrived, he found that Lazarus had already been in the tomb four days.

11:18 Now Bethany was near Jerusalem, some two miles away,

11:19 and many of the Jews had come to Martha and Mary to console them about their brother.

11:20 When Martha heard that Jesus was coming, she went and met him, while Mary stayed at home.

11:21 Martha said to Jesus, "Lord, if you had been here, my brother would not have died.

11:22 But even now I know that God will give you whatever you ask of him."

11:24 Martha said to him, "I know that he will rise again in the resurrection on the last day."

11:25 Jesus said to her, "I am the resurrection and the life. Those who believe in me, even though they die, will live,

11:26 and everyone who lives and believes in me will never die. Do you believe this?"

11:28 When she had said this, she went back and called her sister Mary, and told her privately, "The Teacher is here and is calling for you."

11:30 Now Jesus had not yet come to the village, but was still at the place where Martha had met him.

11:31 The Jews who were with her in the house, consoling her, saw Mary get up quickly and go out. They followed her because they thought that she was going to the tomb to weep there.

11:32 When Mary came where Jesus was and saw him, she knelt at his feet and said to him, "Lord, if you had been here, my brother would not have died."

11:33 When Jesus saw her weeping, and the Jews who came with her also weeping, he was greatly disturbed in spirit and deeply moved.

11:37 But some of them said, "Could not he who opened the eyes of the blind man have kept this man from dying?"

11:38 Then Jesus, again greatly disturbed, came to the tomb. It was a cave, and a stone was lying against it.

11:39 Jesus said, "Take away the stone." Martha, the sister of the dead man, said to him, "Lord, already there is a stench because he has been dead four days."

11:41 So they took away the stone. And Jesus looked upward and said, "Father, I thank you for having heard me.

11:42 I knew that you always hear me, but I have said this for the sake of the crowd standing here, so that they may believe that you sent me."

11:44 The dead man came out, his hands and feet bound with strips of cloth, and his face wrapped in a cloth. Jesus said to them, "Unbind him, and let him go."

11:45 Many of the Jews therefore, who had come with Mary and had seen what Jesus did, believed in him.


Browsing, I read no further than the book's jacket:  Homo Deus.  The jacket notes explained the thesis:  that through technology, humans would "upgrade" (silicon chips; genetic engineering?  I don't know.), and one of the dire warnings was to look to the way we treat animals:  that is the way "homo deus," or upgraded people, would treat non-upgraded people.

So:  the way we treated the natives on this continent when Europeans arrived (Columbus made slaves of them almost immediately).  The way we treated Africans for almost 400 years.  The way we treat the poor in America now, who are almost invisible to us.  Actually, we study animals more carefully and observe them far more sentimentally than we do the poor in this country, so being treated like animals might actually be an improvement.  I can watch entire series on PBS devoted to animals; only the occasional documentary about poverty in America, about what it is like to be poor anywhere in the world.

The book jacket warning, of course, was aimed at people like me:  people with enough money and leisure and wealth to wander a store and look at books and consider buying them and read the jackets to decide.  People with that much money to spare.  We would be treated like animals.  We would be treated the way we treat others, through our neglect or our ignorance or our simply apathy.  "We are as gods, so we might as well get good at it," The Last Whole Earth Catalog advised.  But that was almost 50 years ago, and even in the materialist sense they were meant we haven't heeded those words yet.  Now someone comes along to warn us those words will come true, that it is as inevitable as sunrise, and we had best start adjusting to it.

"What fools these mortals be", says Puck; but he meant it lightheartedly.  It's true, however.  Are we rushing foolishly to our demise?  Probably, but not because of technology, or "evolution," or any other pop culture idea as ephemeral as a soap bubble.  We are rushing forward with eyes wide shut, sure that our salvation lies in our personal accomplishments, that our self-aggrandizement will be our success, and knowing deep down it is all lies and nonsense and falsehood, and so afraid the day of reckoning will fall, and we will pay for our folly; even if we see it coming.

Our bones are dried up; we are cut off completely.  But are we?  Are we ever?